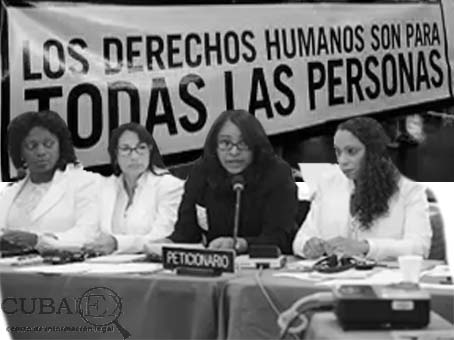 Cubalex, 3 April 2017 — The defense and promotion of human rights in the world depens on the work done on the ground by civil society organzations, documenting human rights violations.

These organizations are the mediators between individuals and the State and an essential pillar for the strengthening and consolidation of democracies and the rule of law. Without civil society, there is no legitimate state.

Lamentably its members often are exposed to dangers. Many times they are tortured and subjected to inhuman and degrading treatment, including murder. They are vulnerable worldwide, due to undue restrictions on freedom of opinion, expression, peaceful assembly and association.

However, the Cuban State disagrees with the rapporteurs’ characterization of the people who make up the organizations that defend human rights in Cuba. The State considers it inadmissible that they should be recognized internationally as such and as a part of Cuban civil society.

The State says that these human rights defenders aim to openly transgress the laws, undermine, subvert and destroy the political and social system, the internal legal and constitutional order, established in a sovereign way by the Cuban nation, acting against the purposes and principles enshrined in the International agreements on human rights.

It asserts that they are everything from invaders to terrorists, hiding behind the mantle of human rights defenders. it states that they receive funding from the United States government to fabricate excuses that justify their policy of hostility, blockade and aggression against Cuba.

The government denies the work of defending human rights on the part of informal civil society organizations, and discredits them, to increase their vulnerability.