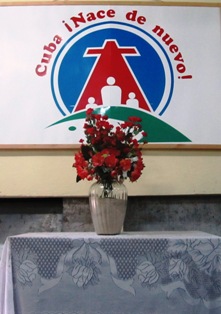 On the night of June 22, in the Cotorro municipality in Havana, we celebrated the 80th anniversary of the coming of the Evangelical church to this country.

At Villa Rosa Baptist Church the different denominations of the town were brought together: Church of God in Christ, God of Prophecy, Assembly of God, The Open Bible, First Pentecostal, Full Gospel Church, Brethren in Christ, Free Baptist and Western Cuba Baptist. Also represented were churches from the cities of Atlanta, Georgia and Houston, Texas, in the United States of America.

It was the Western Cuba Baptist church that started the missionary activity in El Calvario in 1930. And so the pastor of this church gave the sermon. He called for the unite of Christians. For living in harmony with the faith, and firmly defending the unity of the family. And to boldly keep all the good that God has given us.

I remember that in the decade of the seventies the evangelical seminaries were closed and the students were put in forced labor camps. The law of Obligatory Military Service was also established and those who for reasons of their faith refused to take up arms were put in prison.

Therefore it was gratifying to confirm that it works to eliminate the traces of hatred and resentment. The young guides will convey to their congregations a message of peace, love and family unity. They will seek to rescue the values that years of materialistic atheism destroyed.

We know that the struggle for civil rights led by the Rev. Martin Luther King was conceived and developed in the evangelical churches of black communities. These people were brought together by their faith and shared way of life, which enabled them to act as one to fight for full integration into society.

In our country, for decades, they have promoted hatred, violence, and confrontation between people. And so it is commendable to see preachers reclaiming, peacefully and with strength and determination the inherent rights of human beings. To instruct people in education programs and to train people in programs for non-violence forms the future leaders of our community and government.