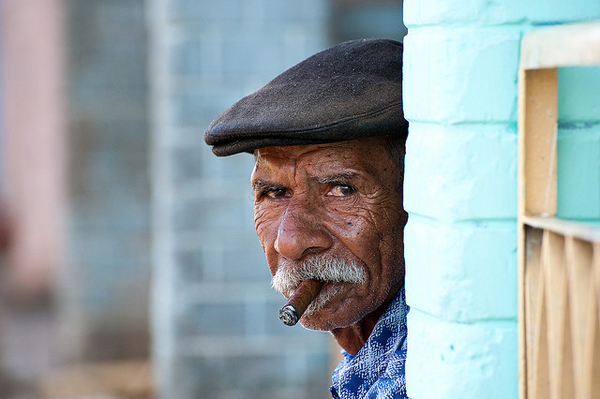 The statistics are troubling. For more than thirty years the average Cuban woman has given birth to less than one daughter during her entire reproductive life. A population that does not regenerate gets old. And decreases. This means that in absolute terms Cuba has begun to lose inhabitants.

There was a report issued by the National Office of Statistics in 2011 which notes that the cumulative age of the country’s three strongmen – Fidel Castro, his brother Raúl and José Machado Ventura – is 250 years.

More dramatically, more than twenty thousand people between the ages of 10 and 45 emigrate each year. One of the government’s solutions to counteract the aging and decline of the population has been to raise the retirement age to 60 for women and 65 for men.

Added to this is the serious housing problem. Some 62% of homes in Cuba are in a fair to poor state of repair. Three or four generations must live together under the same roof. When more space is needed, it is often the aged person who is displaced. The best option is for grandparents to live with their grandchildren. The worst is for families to send them to some decrepit state institution.

With its lack of sanitation, poor treatment and even worse food, death’s worst waiting room is a state-run hospice.

By 2012 more people were dying than were being born in the country. The weak economy does not guarantee a comfortable life for the two million people over the age of sixty. Today the median age is 38 years. By 2025 it will rise to 44 and almost 26% of the population will be over the age of 60. By 2030 more than 3.3 million people will 60 or older.

Currently, the percentage of Cubans over the age of 60 is 17.8%. The segment of the population 14 years or younger is 17.3%. The ideal solution would be to adopt policies that encourage women to have two or more children.

European countries with a welfare state pay a stipend to mothers who have more than one child, but public funds for this in Cuba are minimal.

Since Raúl Castro inherited power from his brother, the number of construction projects  that do not turn a profit, such as social service and leisure facilities, has declined to almost zero. Investments are made only in buildings that generate hard currency, like those in the tourism industry, or which are strategically important, such as petrochemical plants and waterworks projects in the eastern region.

We should not have to wait for a session of the one-note national legislature to announce financial incentives to encourage women to have more than one child. Otherwise, Cuba’s accelerated aging problem will be an issue that a future government will have to address.

Life dictates that by 2025 the Castros will be either resting in some mausoleum or will be two very sickly old men nearing the century mark. In addition to encouraging spectacular economic growth, the next president will also have to renegotiate the country’s external debt and try to create a coherent, inclusive and democratic society

All such efforts will have to be taken up with an aging human capital. A growing segment of women, both professional and non-professionals, are postponing starting families due to material shortages. Convincing them that Cuba needs to rejuvenate itself by increasing the number of girls will be a vital task.

It is yet to be seen if within ten years leaving for Florida will still be the chief priority for many Cubans. We hope not. Otherwise, if you are the last one to leave, please turn out the light in El Morro.*

Photo from 100 Photos of the Older Generation

*Translator’s note: The iconic lighthouse at the Morro fortress overlooks the Havana harbor.