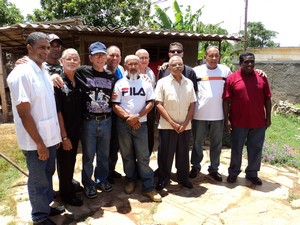 In politics, all isn’t what it seems. Considering that there is no way out, a solution always looms. Above all and more than ever, dictators desire power. But when this isn’t possible, they negotiate the future.

Not so much for love of their country or her people. Simply to preserve their lives and their perks. Augusto Pinochet killed thousands of dissidents in Chile, but in the end, he had to open the doors to change.

The despicable racist government of Pretoria imprisoned Nelson Mandela in a tiny, narrow cell on Robbin Island for 27 years. But before the clamor of the majority of the South African people, then-President Frederik De Klerk had no option other than to negotiate a political exit with the mythical Mandela.

Those who persist in power with a knife between their teeth know the game they’re playing. The masses are unpredictable. They are capable of applauding a six-hour long speech under a fiery sun, or of unleashing their ire and furiously bludgeoning the politicians whom they consider their oppressors.

Remember Mussolini. Or the Rumanian Ceaucescu. If the revolts in North Africa and the Middle East leave us any clear lesson, it is that autocrats are no longer in fashion. Farewell to Ben Ali and Mubarak, Gaddafi and Saleh. Another tough guy, Bashar Al-Assad, has his days numbered in Syria. While the more violently they act, the worse is the fury of the governed.

Have no doubt, Fidel Castro has taken note. He is a student of modern history and every now and then he likes to remind us of it in his somber reflections.

The Castro brothers know that the economic situation in Cuba is very serious and worrying. They must have some contingency plan up their sleeve.

The system has shown itself to be lethally useless to bring food to the table and to produce quality items. We go to work to steal. Efficiency and production are at rock bottom, as are wages.

The future for many Cubans is to leave the country. Those without a future have come to be unpredictable. A time bomb. The present situation is like the sandpaper on a box of matches, at the slightest contact it can burst into flames.

The Castro brothers are maneuvering in a difficult terrain. And if the internal situation in Cuba squeezes them, it might be that they could negotiate with the dissidence. Not for all, just for a part — that which they consider convertible to their interests.

According to some veteran opposition members, it’s very probable that Cuban intelligence has designed a parallel opposition which, in some convenient moment, will serve as a wild card and political actor in a future without the Castros.

It might be paranoia. In totalitarian states, suspicion and the absurd become habit. But it isn’t insane to think that to give the dissidents a space if circumstances force their hand, could become a part of the island’s mandarin’s calculus.

Supposedly, they’re not going to hand over anything, they will have to continue dealing as they are accustomed to, using denunciations, street marches, and – above all – doing a better job with the citizenry.

If the opposition dedicates itself to work in search of its community, does proselytizing work among its neighbors, and doesn’t only offer a discourse to foreigners, it will have a part of the struggle won.

It’s important to increase the denunciations of mistreatment and lack of freedoms to the European Union, the United States, and to the international organizations that watch over human rights. But now is the time to write fewer documents, which almost no one in Cuba reads, owing to the repressive character of the regime and the low access of the populace to the internet.

It’s also time to combine all the points that unite the dissidents and to obviate the discrepancies between the different political factions. The goal of the peaceful opposition must be dialog with its counterparts, as has happened in the old Burma with Aung San Suu Kyi at its head.

To push a regime that has despised and mistreated its opponents into negotiations, there has to be a 180 degree turn away from the old tactics and strategies.

Cuba’s fate worries everyone. The destiny of our motherland will be decided in the next ten years. Or less. For that matter, the opposition could turn into a valid player.

If it is proposed, it will come about. The dissidence has points in its favor. A leaky economy, an inefficient government, and the discontent of a majority of Cubans over the state of things.

In the short term, if the chore is done well, the regime will sit down to negotiate with the opposition. Believe me, the Castro brothers don’t have many cards to play, although they’d like to make it appear otherwise. And dialog is the best option for them — perhaps the only one.