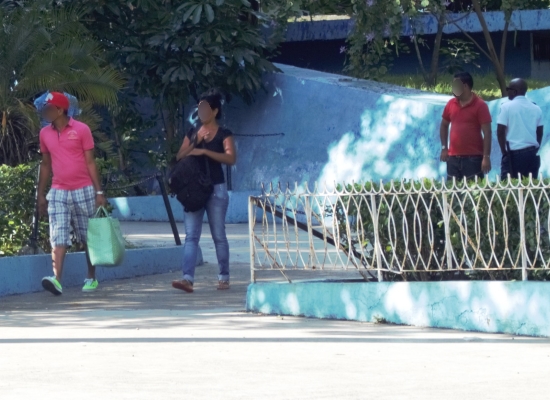 When it first opened, it offered twenty-six flavors. Now Cuba’s most famous ice cream parlor leaves only a bad taste in customers’ mouths.

Cubanet, Manuel Diaz Mons, Havana, 17 December 2015 — Nestled into the corner of 23rd and L streets — the busiest corner in Cuba — and known to many Cubans for its reasonable prices, the Coppelia ice cream parlor has not been meeting consumer expectations for several years. Customers, looking for a place to cool off, take refuge in this poorly stocked and visibly corrupt state institution that next year will mark its fiftieth anniversary.

Designed by architect Mario Girona, it has been under the continuous control of the country’s most powerful directors since it opened in June 1966. Named for a famous ballet, it initially offered twenty-six flavors and had 250 tables that could seat up to 1,000 people simultaneously. Over the years those numbers gradually diminished to the point that now it has only 172 tables seating 688 people. There are often never more than one or two flavors available. The situation has led to customer dissatisfaction and has forced the island’s government to try to explain why operations at the “Cathedral of Ice Cream” — a name it acquired because its role in the film Strawberry and Chocolate — are inefficient and a source of “national shame.” Someone who shares this view is Junior Ferro, a Havana student who visits the establishment on a daily basis because of its proximity to the university and its low prices, features he cannot find at privately owned and state-run ice cream parlors, which sell their products for hard currency.

“The U.S. blockade is to blame for the low inventory and lack of raw materials,” claim many of the company managers when questioned by a journalist who managed to get past the obstacles created by a government that would like to avoid any situation in which this or another state institution could be subject to ridicule. However, to the more than 12,000 Coppelia customers who daily wait in line to satisfy a sweet tooth, the reality is quite different.

“Of course there’s only one flavor available. That’s because they sell whole tubs of ice cream through the front door for all the customers to see,” observes a visibly annoyed Ferro. “What’s even worse is that both the store security and the company management are part of a candy and ice cream mafia. But in my opinion this will change the day Coppelia gets an owner.”

“I have a producer/vendor license,” says Yoan Torres, a young entrepreneur who in the next few days will try to open his own creamery in the town of Arroyo Naranjo on the outskirts of the capital. “This license authorizes me to sell ice cream and other products made at home. It’s the prices that are the problem. Competition is fierce and there is no wholesale market where you can buy supplies.”

Yoan’s license allows him to sell either homemade or factory produced ice cream but both options are costly.

“Selling ice cream in Cuba is a good business. In this country it is hot year round, which means the product is always in demand. But it is difficult to get and making it at home is not an option. It is very expensive and I would never be able to sell it. That leaves buying it in a store or buying from a source at an ice cream factory, either a state-run or clandestine operation. Or I could buy a tub from Coppelia for five CUC (roughly equivalent to five dollars). Either way, I would have to charge at least 0.25 CUC a scoop to turn a profit at the end of the month,” explains the young businessman.

The state’s version of excellence

“When it first opened, coming to Coppelia was great, a real pleasure,” says Virginia, a Cuban grandmother who in a few words makes it all too clear how she really feels about her experiences there. “A scoop of strawberry like in the film (Strawberry and Chocolate) had bits of strawberry in it, to say nothing of the employees. They were the best. Then it all went downhill. I remember when they even locked away the spoons. I bring my grandchildren here because I have no other choice. On my pension this is all I can afford. It’s gotten really bad, my son.”

Within the organization, the management has completely failed at fostering a positive image. Glasses, “canoes” (dishes), spoons and even employee uniforms are dirty. Many of the staff treat customers badly. What the rest of the world associates with a scoop of ice cream has become associated with corruption. All this only confirms what people waiting in line to get inside have been saying: “The Cathedral of Ice Cream is melting.”