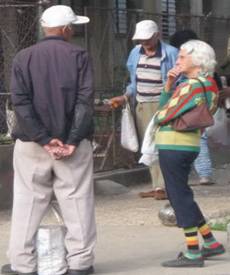 One of the main sources of my posts is the newspaper Granma, not only for what it says, but also how it says it and for what it doesn’t say. Although sometimes it publishes this or that interesting letter, the Letters to the Editor section from last Friday was priceless: either everyone who wrote supports the “Cuban model,” or they only publish this type of letter.

A reader, after pondering the existence of this section, and linking it with objectives 70 and 71 of the guidelines (which couldn’t be ignored), and also with 16, without adding anything new, finished in slogan-style, with the official sentiment: Our worst enemy is our own mistakes.

A fancier defends the breeding of carrier pigeons and ornamental pouter pigeons by the members of the respective federation and association, and denounces the so-called pigeon-raisers who profit off them, making it clear that the Pigeon Fanciers Federation gives its unconditional support to the Revolution. I think this assertion does not include the opinion of the pigeons themselves.

Another reader complains that in a town he visited, there has been no water for three months because the engine that supplies it is broken, and explains that all the measures taken by the authorities to solve the problem have been unsuccessful. He complains about the charge of 50 Cuban pesos for every water delivery and adds that he understands that the blockade, the hard work of the leaders, etc. has prevented a solution to the problem, and ends with the same slogan as the previous writer, that this Revolution can only be destroyed by ourselves.

A hothead, shield raised high, states that each patient should be informed about how much their treatment costs the State, forgetting that the State, with what it doesn’t pay citizens in their penurious wages, has many more financial resources at its disposal to distribute to the services of health and education.

Despite its small size, this sample demonstrates how low the level of public awareness still is, and how much we have to advance to be able to have a true civil society.