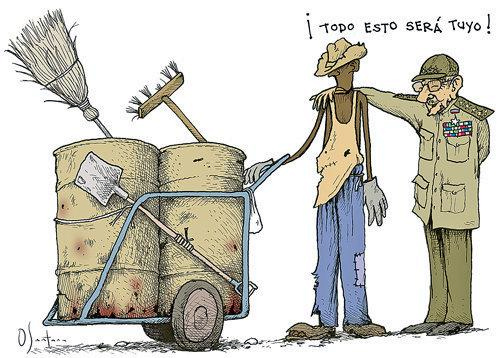 “ALL THIS WILL BE YOURS!” — Picture from La Nueva Cuba on the Internet

A recurring theme among the last days of 2011 and early 2012 by Cubans and foreign individuals interested in the Cuban reality has been about the outlook for the year just begun, given the chronic nature of the national economic crisis, the ongoing measures (reforms) of the General-President, with his Galapagos kind of pace, the announced increase in the worldwide recession and the political events that will have an important influence on the situation in the medium term, namely, the presidential elections that will take place in the United States and, fundamentally, those in Venezuela.

The warning signs that constitute the tip of an iceberg floating adrift erratically became more pronounced in Cuba in 2011: the removal of some subsidies, the end of the monthly lifetime allowance in hard currency (50 CUC) to staff having completed health “missions” in other Third World countries, the shut-down of several work centers and other silent layoffs, the reduction in ALBA (Bolivarian Alliance of the Peoples of Our Americas) student programs, especially at the Latin American Medical School, increases in food prices and other staples, worsening economic living conditions in the poorest sectors of society (the majority), in contrast against increases in the standard of living of a small sector of the new middle class, among others. This, coupled with the general apathy and the growing feeling of helplessness on the part of groups that will not benefit from Raulista measures, is a picture that points to the further deterioration of social situations and the potential increases in crime, among other adverse factors.

One of the strongest contradictions is the slow pace of government reforms, which, so far, has been unable to stop the deterioration of the system, compared to the rapid social impoverishment that is directly reflected in the disappointment, uncertainty, and lack of confidence in the future, especially a future dependent on the power group that controls both the macro economy and national politics. There don’t seem to be many flattering indicators, or reasons for hope. If the welfare of Cuban families hinges on setting up a kiosk or an eatery, on remittances received from relatives abroad –those who have that luxury- or on expectations that hang on the generosity of the government, we might as well start turning out the lights and closing the doors: that is not a future.

On the other hand, none of the new economic “rights” has been matched by social and political rights, as is logical under totalitarian regimes. Cubans have been so thoroughly disenfranchised and have been subjected to such “paternalistic” controls that even we in the opposition factions and independent civil society have sometimes unconsciously wished that freedom of expression, of association and of the press be “allowed”, as if they weren’t natural rights inherent to the human condition. What can we expect from others who have let discouragement win!

Nevertheless, 2011 was also witness to a surge in alternative and civic groups and to obvious links between the two. A spontaneous process of modest but visible growth has been taking place within the independent civil society, which could be consolidating gradually. Undoubtedly, though it is a small sector, corresponding to the conditions of the dictatorship, this is the reflection of the will of Cubans with emancipated mentalities, determined not to ask permission to be free, convinced that it is vital to transform reality within ourselves. A few years ago this was unthinkable. Similarly, along with the growth of civic spaces, we can expect strong resistance from the authorities, and an eventual increase in repression.

The fate of one and all in this 2012 will be marked, among other situational factors, by the interests that have already been outlined more clearly, which, in very general terms, are: the olive green elite and all of its caste, by virtue of recycling itself in order to maintain power; the great entrepreneurs, members of that same caste or associated with it, for maintaining an economic monopoly and increasing their private capitals; new small businessmen and owners, for increasing their profits, making use of the meager reforms, and perhaps for fighting for other reforms; the ever-unfortunates, for surviving another year of shortages; we, the disobedient dreamers, for increasing activism in order to promote awareness of democratic changes and for seeking new ways to foster them.

Some readers may think I’m pessimistic, but that is not the case. My greatest optimism consists precisely in viewing reality face-to-face and continuing to wish for changes. Today, the despair of tens of thousands of Cubans is one of the main allies of the regime. However, we must not give up. We might find the opportunity and perform a miracle in the midst of all this dark, murky and imprecise present. Nobody knows how much time we have left, but it is not the time to throw in the towel. Those of us who are alive and want to achieve will not allow fatigue and defeat to win the game.