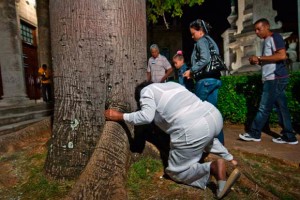 After going through a black iron gate, hundreds of Habaneros, tourists and religious, calmly wait to take three turns around an ancient ceiba, throw a handful of coins at its roots and quietly ask for their desires or make promises.

It is the ritual with which every November 16 marks the anniversary of Havana. This city, humid, hot and noisy and is 491-years-old. With its cracked streets and drinking water lost to the sea due to the deplorable state of the pipes. With a terrible infrastructure and urban transport that is a calamity.

Despite all these disasters, the Cuban capital has a ceiba tree located in The Temple, its true icon. Every good Habanero, once in their life, has visited it. Just outside the old Palace of the Captains General, next to the Castillo de la Fuerza and the Santa Isabel hostel.

Very near the Cathedral and the Bodeguita del Medio with its scrumptious black beans, these days the Havana ceiba welcomes thousands of people who yearn for a better luck for their city. And almost in a prayer they supplicate their God, Catholic and Yoruba, to bring improvements to their lives.

People do not go to the ceiba of the Temple people because the State called them to do it, nor do they listen, there, to inflammatory speeches. No. People go from genuine and natural impulses. Here, for a few minutes, they cast aside the mask of mendacity and hypocrisy. They forget the party slogans and clichés. While they make their three orbits, they park their enmity and hatred.

All cities have their hymns, songs and shrines. In this old part of this mixed Havana of Joseíto Fernandez and his famous Guantanamera, of the masterful Ignacio Jacinto Villa — nicknamed “Snowball” — and of politicians and humanists such as José Martí, there is a historical ceiba waiting for their wishes and coins.