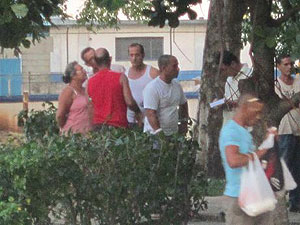 A group of civil rights activists gather every Tuesday and Thursday between 6:00 and 8:00 PM in the park at 31st and 41st, at the corner of the “League against Blindness” hospital, very much in tune with the function of activists to tear off the Cubans’ blindfold and teach them to overcome their fear.

To carry on his example and in memory of one who was vilely murdered, they began to meet the same day the dissident Juan Wilfredo Soto (known as “The Student”) was buried, and branded this day as the birth of the Citizen Evening.

In the beginning there were three who started the Evening, then five, eight, nine, ten, eleven, twelve, thirteen, fourteen defenders of a free space, who have resolved to pay the highest price.

They come from all directions, with saddened faces. It’s time for those who have heard the call. They don’t know what’s in store for them for the rest of the afternoon. On previous occasions they have been arrested, beaten, threatened. But despite everything, they find a glimmer of nobility invades them and they embrace each other.

“We came to have a contradiction,” José Alberto Álvarez Bravo, the principal organizer, told me. “Every time we would get to ten people, they beat us. Sometimes we saw we had reached the number nine, we didn’t know if we wanted the next one to join us or not; but the conviction we have chases away the fear, the beatings don’t matter. They break our heads, we go to the doctor, get sewn up and return. They break our bones, we get a cast and come back. They lock us in a cell, we wait, at some point they will have to release us, and without another thought we return. It is our conviction. Despite the suffering we have to bear, we want a hundred, a thousand, a million to join us, all the people of Cuba to demand their rights.”

While members of State Security remain on the lurk, the dissidents help to chase away the fear by conversing on specific topics, “The concept of possible unity”; “The need to implement the affective element in civil society”; “Tolerance”; “Absolute respect for individual freedom”.

“We try to learn to be citizens,” one of the youngest people, Yaroslan Tamayo Rueda, told me, without losing sight of the two agents who pretended to be chatting.

“We train ourselves,” continued a girl, “on how we will live in a democratic Cuba, at least theoretically.”

The agents move around us, looking nervous. They are awaiting the order to proceed or to remain “passive.”

I look over the faces of the group of dissidents, looking for the answer that summons several generations to meet, what motivates them to run the risk, despite the harassment and abuse: professionals, workers, a peasant woman, blacks and whites. I talk with them and learn the reason that unites them: CHANGE. They need progress, freedom.

José Alberto Álvarez Bravo, as his second surname attests, has suffered six arrests. Threats to send him to prison, even death.

“The political police stole two cellphones from me,” Jose Alberto told me. “On July 12 several police raided my house to steal my laptop and all its components. They took my books,” he continues calmly while I take notes, “worth 64 CUC. They are common thieves, plain highway robbers.”

He pauses, looks around or into the void, trying to let his eyes rest in the distance.

“But having understood that nothing they do against me is going to intimidate me, they have decided to plant fake “dissidents” that have said that in the search they found 20,000 dollars under my pillow that had been donated, and that I had not reported it so that I wouldn’t have to share it,” José Alberto smiles sadly. “I haven’t seen money like that even in films.”

And he calls to Inés Antonia Quezada Lemus, one of the courageous Ladies in White.

“Show him,” he begs her, “the bruises you received at G and Calzada streets.” She, without much interest, shows some marks that refuse to go away.

“It was worse with him,” and she hugs him. “He is a real hero; he put up with as much pain and humiliation as Christ.”

The shy young man shows me a string of cuts on the arms. He states that the military men, in exchange for granting gifts, would incite the common prisoners to beat him.

“I was raped,” he told me and the news hit me like a blow on the chin. “The officers penetrated me. One by one while they repeated that I would never again think of yelling ‘Down with the dictatorship’ and ‘Fidel is a murderer'”. They would assure him that he was going to know what a real dictatorship was. (But this is for a future post that I will do in the form of a reminder. The denunciations will never be sufficient.)

In solidarity, a girl watching from a nearby bench alerts us to the fact that they are taking photos of us.

“Don’t give them an importance they don’t deserve,” says Leidi Coca, another of the Ladies in White.

Someone in the group says that, sadly, we need to break it up because it’s 8:00 pm.

“And now we wait again, five days, to revive this space of freedom not governed by the Castro brothers,” laments Inés Antonia.

Each of us expresses the feeling, the experience that goes through our bodies and minds as we inhabit a space, miniscule for now, of total freedom.

Finally we give a parting embrace to those mentioned before and to René González Bonella, Florentina Machado Martínez , Pedro Larena Ibáñez.

We go away fearful, but with the firm determination to return the following Tuesday and bring that space of freedom back to life .

José Alberto Álvarez Bravo has been detained since September 20th, when he was on his way to participate in one of the Citizen Evenings.