Havana, Cuba, December 24, www.cubanet.org — As a good predictor of the future, this man forecast that Christmas would not be necessary in a socialist country.  He knew since then that there would be no victuals and much less family for the days of celebration.

It is noteworthy that in the Population and Household Census carried out in September 2012, from which definitive results were recently offered, the National Office of Statistics and Information has not included in its questions how many of us Cubans are distant from our families.

Without any doubt any of the 11,167,325 inhabitants of the Caribbean archipelago suffers that pain.  So it is difficult in more than three million Cuban homes in the country, to be able to evoke these Christmas days happily, if those we love are not present since we opened our eyes to the world.

Even the dictators themselves Raul and Fidel, generals and colonels, representatives of all the new social class — human beings after all — are not exempt from that suffering.

Sonia and Pedro Yanez, my neighbors from across the street, are those who suffer more.  Two years ago their oldest son went in a boat and what remains for them is the same idea of leaving. 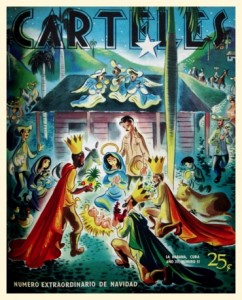 Much more these mothers from Santa Fe, who lost their sons in a sea infested with sharks.

Even I myself, with my only three sons scattered across the world, because they cannot live in Fidel’s Cuba.

Those of us older than 70 suffer most from the collapse of the Cuban Christmas. We remember the Christmas Eve dinner, always with family, the marvelous dawning of the Day of Kings, where we discovered in a corner of the room the toys that the invisible mythological kings left us with so much affection, the year’s end, when grandmother threw into the street a pail of old water so that good luck might enter the house.

They were times when we could dream, in which hope had still not been lost, which hope disappeared when the Commander arrived and ordered it to stop, hope that has revived again in spite of repression and draconian laws.

That’s why, this December 24, I am going to toast my sons, my father who walked alone through the streets of Miami before dying, my mother, who did not want to tell me that communist tyranny had killed Christmas so that the divine fantasy might disappear from the mind of civilized Man, my dissident friends, whom I remember with love, my last sweetheart, polititical prisoner for more than 20 years who some day will return.