Many people think I’m talking about some torture method designed by the Chinese to deliberately hurt someone, but it’s far from that, I’m talking about the famous Yutong brand buses made in China, although I am sure there is nothing intentional in their design with the goal of torturing us, but even so they do so with amazing efficiency, especially when the distance traveled is long. 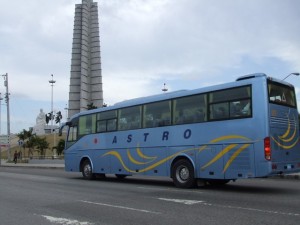 Obviously the Chinese did not make their Yutong buses thinking about the characteristics of Cubans. If they had they would have made the space between the seats a little greater, because we don’t like to ride with someone else hanging over us, especially if people we don’t know are too close to us.

The seats in these buses have caused more altercations between the passengers and if you really want to know what I mean by torture you would ride one of these buses from Villa Clara to Havana and it would be enough to understand, although you would have to be a masochist to take this 14 hour journey from the capital to a point in the eastern part of the country.

Jokes abound among the clients of the nation’s only bus line, the ASTRO, which despite its name loses more luster every day, because the buses are aging and not receiving much maintenance. For example the backs of the narrow seats have mesh bags for a water bottle or some other object that we carry on, but no more. In many of the buses the curtains are cracked, or cannot be snapped shut, so we have to travel under the hot Cuban sun, or in the cold of the moonlit night. Or if the glass is dirty you can’t see out which is very bad for the claustrophobic.

If we add the stink that emerges from the bathroom, added to the monotony of travel because the screens for projecting films don’t work and the music is unserviceable for the whole trip. But the most uncomfortable thing is how little space there is between the seats.

As I said, the joke and conjectures are many: that the Chinese think we Cubans have limbs as short as their, or we’re as skinny or as stiff as they are, that the buses were made to travel short distances, that even if I wore kneepads I’d be poking some guy in the back, that the fat chick next to me almost pushed me to the floor and the last I heard: HEY! This bus is a Chinese torture chamber!

Recently we were visited at home by a group of friends and the anecdotes rained down and in my house I finished the tube of Ben-gay giving my visitors massages, imagining their misery stuck in the seats right in front of the bathroom which don’t even recline.

If anyone still doubts what torture these buses are, if a foreigner comes to the country and doesn’t travel in a rented car or the tourist buses, they should climb into a national Astro, sit themselves down on one of those rigid seats and I’m sure after that experience no one will be able to tell them stories about the true reality that we Cubans live every day.