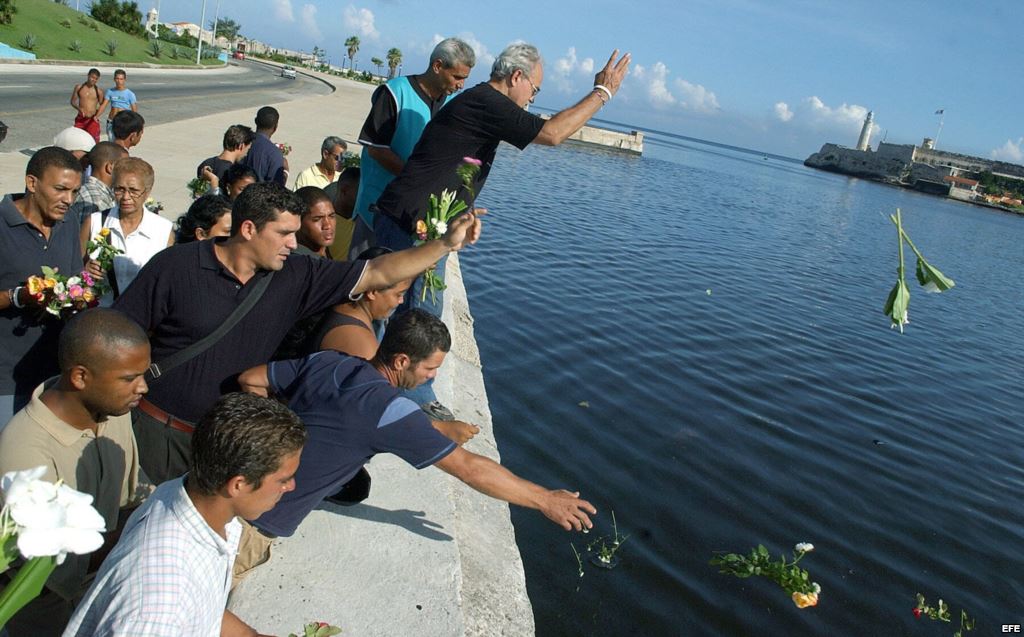 About 30 members of the Cuban opposition,belonging to the illegal Partido Popular Republicano, throwing flowers into the sea in memory of the victims of the tugboat “13 de Marzo”. Archive photo (martinoticias.com)

What happened can be briefly summarised: on July 13th 1994 – 17 years ago today – at the crack of dawn, 72 people tried to escape from the island in a tug. When they were some 12 km from the coast of Havana, three other tugs charged the vessel, spraying high pressure water jets over its occupants. In succession they targetted the 13 de Marzo – which was now flooded – until it gave up the ghost, broke up and sank, with a total of 41 fatal victims, 23 of them children, including a 6 month old baby.

Up to now, the Castro government has not shown the slightest willingness to clarify what, from the start, it termed “an accident”. In the Granma daily newspaper, ten days after it sank, an article appeared – signed by Guillermo Cabrera Alvarez – where it said that, among other things, “a group of company workers took direct action to defend its interests. They informed the Coastguard of the crime and took it upon themselves to prevent them getting away.” Earlier, the same newspaper had argued that “in order to obstruct the theft (referring to taking the 13 de Marzo towboat), three MITRANS boats tried to intercept it, and while they were manoeuvring in order to achieve that, the unfortunate accident occurred, in which the vessel sank.”

Since then, the tone of the sporadic explanations given by the government has remained the same:  we were dealing with an irresponsible act of  piracy promoted by the “counter revolution” , in the face of which people took the law into their own hands.  Obviously, goes the official line, the “people” taking the law into their own hands is nothing punishable.  As long as things turn out in their favour, any crime is justifiable.

It’s clear that the official version gives rise to various questions. If we were looking at a spontaneous, uncoordinated action, why were various tugs waiting at the entrance to the bay for the 13 de Marzo tugboat, at the crack of dawn? And why tugs exactly, a type of boat which lends itself perfectly to intercepting fugitives ? Why did these lookouts let the vessel continue on its flight? Why did the interception take place some seven miles off the coast, exactly where it could not be spotted  from the land by unwelcome witnesses, but while still in Cuban waters?  And how was it possible that, having been informed about the escape from the start, the coastguard  speedboats  delayed for an hour and twenty minutes before turning up at the scene, after the massacre had taken place?

But all these questions become irrelevant when you frame the fundamental question: why don’t they try the case to clarify once and for all if what happened was an accident or a crime? Because, if it was the first, the urgent, reasonable and normal course is to put the people involved in front of a judge, a defence lawyer and a prosecutor, in order to see justice done. That’s what happens when any traffic accident occurs, especially if there are fatalities:  they don’t take the driver’s innocence as a given; they investigate first. And, in Cuba, since 1959, the accused have to prove their innocence.

Meanwhile, the massacre of passengers of the 13 de Marzo tugboat – more than that of Canimar, Cojimar, Guantánamo base, etc. – has become lodged in the  collective memory  of those who are exiled and even of many of  those who are stuck on the island. The image is horrific: a young woman protects her baby from the Castro regime’s high-pressure jets of water, while she shrieks, almost in a whisper “they are going to kill the children …they are going to kill the children … “. She surrendered, but to no purpose. She surrendered , and her executioners mocked her. She surrendered, but in an island’s memory, it is exodus and memory, escape and perennial return, the Tug does not surrender.

The screaming of the children continues to shake our ears.