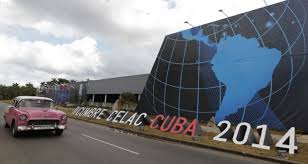 I was going to comment, or more to the point gossip, about the recently concluded Summit of the Community of Latin American and Caribbean States, but I’m fed up with the topic, and I think you are too. We spent more than a week on this old song… that if Argentine president Cristina Fernandez lunches with you-know-who, that if Ban Ki-moon gets his hair cut in the historic district, that Raul Castro makes nice with Brazilian president Dilma Rousseff, and there are even toasts to the health of the Mariel mega-project, so it won’t turn into salt and water. And to top it off,when I say CELAC, I immediately think of its relationship to Cuban CERELAC (a baby porridge), and it shocks me just to mention it. Trauma not overcome.