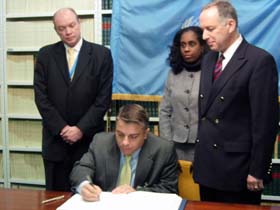 While both the European Union and the United States condition their relations with the Island’s Government on progress on human rights, the Cuban State remains silent concerning its ratification of the international agreements in this area.

Was this intention, or was it a simple strategy?

I’ll explain. Since December 1966, these two Agreements have been open for signature and ratification by all of the member states of the United Nations. Havana signed these agreements two years ago, but has yet to ratify them. The International reaction has been positive. The new government gave the impression when it signed the agreements that it was emerging from its isolation and was guaranteed legitimacy. There was even talk of possible changes within the closed Cuban system and of a visit to Cuba by Manfred Nowak, the UN’s special envoy on Torture. But there were neither changes nor was the UN’s special envoy able to travel to visit the Island’s jails.

In spite of announcing (and then failing) to lift the prohibitions, the government managed to end the European Union sanctions and a private dialogue, without results, on human rights. However, to date, the Cuban State not has given its consent to enter into international commitments on human rights.

Who can make this decision?

As the procedure is different in Cuba, the Ministry of Foreign Affairs has to wait for both consents, both that of the Councils of State and Ministers, and then prepare the instrument of deposit or diplomatic note to ratify the UN agreements.

What is the reason for this delay?

According to specialists that I consulted, the two Covenants have not been ratified because the application of these international agreements in the country is seen as a threat to the dynasty of the Castro brothers. And because States that ratify these Agreements, undertake to take appropriate measures to enact the necessary legislation so that the civil, political, social and economic rights of their citizens are respected.

This would mean that the Cuban Government would have to carry out major reforms in its legal system. It should, for example, to repeal Law 88 (the gag law), which prevents the freedom of expression.

It would have to abolish Law #989 enacted on December 1961, that enforces that permission is required to enter or exit the national territory, as well as the definitive abandonment and the confiscation of property of emigrants. It would also be required to abolish Decree 217 that regulates internal migration to Havana, and prohibits residents from other regions from establishing a household in the capital.

The validity of the Agreements would require a reformation of the Constitution, which penalizes the exercise of the rights of those opposed to the existence and purpose of the Socialist state. In addition, it implies a serious change in the political system, particularly as regards the existence of a single party. The Constitution recognizes to the Communist Party of Cuba (PCC), as the “top leading force of society and State.” This recognition includes its ideology.

Political pluralism is legally forbidden. The PCC does not support equality with other parties, nor recognize the legitimacy of any different ideology. The law of associations also contemplates the existence of other political organisations. The current rules and peculiarities of Cuba’s legal system contradict the principles supported by the Pact of Civil Rights, which recognizes the freedom of opinion, movement and association.

The delay in these ratifications to the United Nations, is the responsibility of the Cuban Government. The main reason for the delay, as an independent lawyer sums it up: “If the regime ratifies and puts into effect the International Covenants on human rights, it would be shopping for rope for its neck”.

What Roque Pérez — who was subsequently fired — signed in New York in 2008, was only a strategy of distraction by the Cuban Government to win political time.