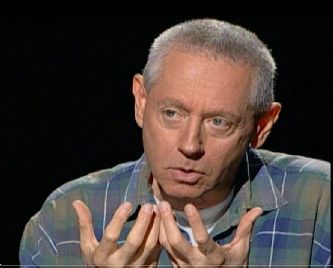 Jose Kozer, (taken at the site of “Una Belleza Nueva”)

The documentary titled Me, Japanese “Seeks to reflect the personality and work of Kozer, one of the most prolific American authors and simultaneously to explore his identity and his status as an exile,” stated the editor of the site in Miami.

“Kozer, 73 and of Hebrew origin, went into exile in 1960. For three decades he worked as a Professor of Hispanic literature at Queen College of New York and is now retired, living in Hallandale, Florida. He has published more than 50 books of poetry and has written more than nine thousand poems. Last year, he received the Ibero-American Poetry Pablo Neruda Award, awarded by the National Council for Culture and the Arts (CNCA) of Chile.” We, the lovers of poetry and words which put together the world, will collaborate in the project (so say I).

Two youngsters, Magdiel Aspillaga and Malena Barrios already have several hours of interviews with Kozer and several of his associates. They intend to raise $ 5,000 to address the process of post-production, including editing, sound, final mix, music and color correction. It’s hoped that the documentary will be 45 minutes to one hour in both English and Spanish.

“Aspillaga, 34, has live in the United States since 2008 and has made two films of fiction, Vedado and Neuralgia. Barrios, 30, has worked as a screenwriter and Assistant Director. Writer Joaquín Badajoz is also one of the producers of the tape,” concludes Cafe Fuerte while detailing the fundraising projects.

Immortalized by the poet Eliseo Diego, it is still one of the most extensive roadways in the city. In the 1950s numerous bus routes ran along it and it saw a great deal of vehicular traffic, though by then the streetcars were already gone as were their tracks and overhead electrical lines.

It was adorned with movie theaters, stores of all kind, bakeries, pastry shops, bookstores, pubs, restaurants, coffee houses, pharmacies, jewelry stores, a major hospital (Purísima Concepción, more commonly known as Quinta de Dependientes), police stations and the constant hustle and bustle through its doorways and over its sidewalks of students from numerous schools located nearby, who visited its bookstores in search of school supplies and classical textbooks published by Editorial Thor, which were offered for sale at low prices.

The cinemas Florida, Moderno (side-by-side with Police Station no. 11), Apolo, Tosca, Gran Cinema and Marta (which faced Station no. 14) satisfied the needs of several generations of movie-goers.

The Toyo bakery and pastry shop, as well as a pub with the same name — located on the lower floors of the Civil Registry building — became synonymous with one of the busiest and noisiest street corners in Havana. It served as the crossroad for those buses that changed course, heading in the direction of Calzada de Luyanó, and those that continued, one way or another, along Calzada de Jesús del Monte.

Several blocks away, near calle Tamarindo (Tamarind Street), the characteristic aroma from the coffee roaster permeated the surrounding area, reaching as far away as the pharmacy, as well as the small shoe store and its workshop across the street, beyond calle Municipal (Municipal Street).

Further along, from left to right, there was a series of stores until you got to Loma de la Luz, which everyone associated with the roadway of the same name. After that there was the parish church Jesús del Monte (Jesus of the Mountain) and the high, thick wall that still obscures it, leading to the multiple commerce established in the space between the Loma de Chaple (Hillock of Chaple), at the end of the Lacret Street and beginning of the Avenida de Dolores (Avenue of Pains). Hundreds of meters away, the Avenue de Santa Catalian has taverns, coffee shops and a bakery. In between other types of bread served at the bakery, they offer a Galician bread known as “bonete”, as well as cookies, breadsticks, pork crackling and pastries of cheese, ham, or meat.

On the opposite side of the street was the Tosca movie theater, where we children over twelve years old would go, motivated by the French and Italian movies, which showed light nudity, something unusual in the United States at the time.

Then appeared the residences of the middle-class, more rich and progressive, that had large portals with columns and were always uphill. The “Paradero de La Vibora”was where the tramcars ended their travels and entered the maintenance area in order to start their routes again.

Then, with the disappearance of tramcars,the maintenance area became the modern bus stop, which were called “nurses” due to their white and blue color. This place was suitable for trade since it was the beginning of Route 38 that led to Batabano. Batabano and had a conglomerate of restaurants, inns, cafes, french fry stands and shops. It also had a beautiful house with the figure of a “black boy with the lantern”, dressed with blue pants and a red shirt, in the large front garden. Opposite the house was the Tropicream, the house of one of the first settlers in the city, and the square of the Church of the Passionists.

Next to this this was the street that led to the Institutes of the La Vibora and Edison.

Beyond this there was a train station, which was home to the legendary Cafe Colon and across the street was the Cheesemonger Santa Beatriz, a modern milk pasteurization plant. Then there were scattered homes, some with patios, fruit trees and gardens, which marked the end of the cramped city with the houses up against each other and the beginning of the country environment, which extended to the “La Palma” Crossroads, which had a famous ice factory, and continued to Bejucal and Managua Roadways. At that time, after the Avenida de Acosta, the paved road was narrow with large flowerbeds and trees on both sides.

Today, unfortunately, all the cinemas have disappeared with the exception of the “Marta”, renamed Joy and turned into a party room, as have the bread shops, bakeries, restaurants, taverns, inns, bookstores, shops, stands, shoeshine chairs, and many other shops. They converted these premises into housing, with horrendous architectural adaptations or low cost. They also transformed the former “Calzada de Jesus del Monte” into a sad Museum of buildings in decline, totally damaged or collapsed by cave-ins.

One could offer many reasons to try to explain the inexplicable, even dip into the broken argument of the U.S. “blockade” or embargo, but the only real cause of what happened is the incompetence of the authorities and the tax system, both with regards to protecting what was created by previous generations of Cubans, and creating something new and valuable.

The street “Calzada de Jesus del Monte” or “Tenth of October”, as it is called, has had the same terrible fate of other roads, avenues, and streets of the city of Havana.

But in recent months, with the increase in self-employment, some of its sections are home to small private businesses. They even used local buildings, which were previously establishments that became precarious dwellings. Even still, the vast majority of major facilities are in the hands of the unproductive State-owned enterprises, with demonstrated inability to offer quality services to the citizens.

Perhaps these facilities, if they are privately rented or sold, will serve as a real spur for the rapid revival of the once important road, which will never be achieved with the stunted measures adopted so far. For instance, the government only authorised to revive these facilities with a few services where there are fewer than five employees. This means, ultimately, they continue betting on the “bonsai” or “pinching” commercial activity, which actually solves very little.

Anyway, the “Calzada de Jesus del Monte”, due to its importance as a means of communication towards the southeast of the city, should truly liberate the productive forces and the Cuban people can develop their initiative, returning to be what it was was, and then become modernized and in keeping with the time.