Cubanet, Orlando Gonzalez, Havana, 20 February 2018 – “I won my bicycle in 1993 for being a ’vanguard’ worker. I’m a Physics teacher and I remember all the requirements that had to be met to be rewarded with one of these.

“In those days the only thing that mattered to me was not having absences, participating in all political activities and volunteer work and being an excellent worker. They made us compete with our own coworkers and friends to win the bike.

“At that time the ’Special Period’ was very hard, for me it was a great relief when I won it, it was like winning the lottery because it solved my transport problem, pedaling was the best [way to travel],” recalls Ángel González, who, like many Cubans, found a bicycle changed his life in the 90s. END_OF_DOCUMENT_TOKEN_TO_BE_REPLACED

“I remember that first day taking my son to sit on the Malecon. It was almost 20 miles of pedaling but I didn’t feel it because the need was so great and the transport system was so bad that it was my only option; the happiness on the face of my 11-year-old boy that day I will never forget it,” added Ángel, who 25 years later still has the same “Flying Pigeon,” although he no longer uses it to travel long distances because the transport system “has improved” and, in addition, he’s no longer young enough to pedal the 20 miles.

Bicycles from that time and even some that go back to the 50s still roll on Cuban streets, having come to be more valuable than current models because they are “tougher.”

“Now there are a few parts that are Chinese, the chain ring has an adaptation where the original parts are removed and mounted in a ball box. The front and rear hubs and nuts are made by turners with thick sprockets, and the tires and inner tubes are also manufactured by hand. The pedals are made of wood and last longer than the original ones. The seats are also made by hand. In short, only the frame, the handlebars and the fork are the ones that originally came with the bicycle,” Ángel explains.

A whole industry and its market revolve around spare parts for bicycles. The tires, manufactured by hand using old tires, are sold for a price of 8 CUC; the innertubes are also handmade and have a value of 4 CUC.

The “poncheros,” — the self-employed workers who are dedicated to repairing tire punctures — almost always market all these products made by craftsmen. Adrián González, owner of a private workshop, explained to CubaNet how his business works: “When I first set up the repair shop, I had workers who were dedicated only to fixing punctures; then I realized that the spare parts were a good business and I set up a workshop for repairs and the sale of accessories.”

“Some parts, like the front and rear axles, hubs and nuts, are made by turners using old rods and irons; others, like the tires and innertubes, I also get from private factories. I only resell these pieces and I have the manpower to change them in case the client asks, and with that I have enough to live on,” he adds before concluding: “The bicycles are rolling in Cuba today because of all these inventions, because the original pieces are almost impossible to find in the State stores, and when the resellers come in, they hoard them immediately, the demand is so great.”

Felipe has been a turner for more than 30 years and has found a source of income by manufacturing spare parts for bicycles. The great demand caught his attention.

“I am a turner, several years ago I realized the great demand for spare parts for bikes (and) then I began to manufacture nuts, hubs and axles for all the models that exist in Cuba,” he explains. “Although most are Chinese bikes that entered the country in the 1990s, I also manufacture pieces for Russian bikes that are older but more sturdy, those have been rolling since the 70s.”

In the network of state stores, the price of a bicycle exceeds 120 CUC, the equivalent of several months wages for an average Cuban.

However, bicycles were recently removed from almost all state stores. Jorge Medina, the manager of one of them located in Boyeros, explains: “We had several models at different prices that ranged between 110 and 240 CUC; last month they took them all and did not give us an explanation, they came in a truck belonging to TRD [the state chain of hard currency stores] and they were taken away.”

At the same time, “throughout the network of hard-currency stores in Havana today there are very few bicycles for sale and prices have risen considerably,” Medina added.

Even today, more than 20 years after the start of the so-called “Special Period,” cycling is still a key transportation mode in Cuba. 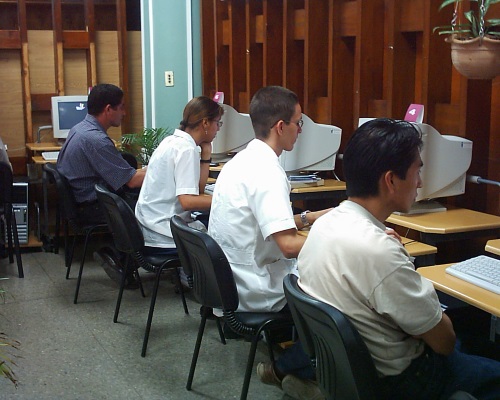 The classified ad website  http://www.revolico.com is very well-known among many Cubans on the island. It lists a wide range of products available on the black market, including merchandise at prices much cheaper than those found in state-owned retail stores. The government has tried, so far unsuccessfully, to block access to the site. Nevertheless, Cubans have managed to make a mockery of the limitations by going END_OF_DOCUMENT_TOKEN_TO_BE_REPLACED

through web services designed to evade censorship (VPN and web proxies). An offline version of the webpage is also delivered to homes through the popular underground entertainment service known as the “national packet.” It contains all the classified ads from the previous week.