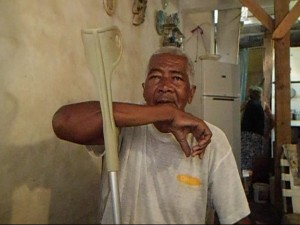 Havana, Cuba, November 2013, www.cubanet.org.  — Juan Lazaro Avila Herrera, physically impaired (his right leg is lame) regrets having belonged in his youth to a firing squad at the La Cabaña Fort.

When he served in the Association of Rebel Youths, at only 18 years of age, he was attracted to belonging to the firing squads.  He remembers that along with him, a group of 23 youths, aged between 16 and 20, were captivated.

According to him, sometimes the executioners seized rings and other items from the people shot.

Once he was accused of counterrevolution and taken to the Principe prison.  He says that during the trial he was so scared that he defecated in his pants.  He thought he would be shot, but he was absolved. In spite of that, after he left jail, for a week he had to go sign in every day at a police unit.

“I was infiltrated into a counterrevolutionary band and participated in several operations.  In one of them I arrested a priest, from whom we confiscated in the basement of the church explosives and weapons plus a map where the places were marked that would be blown up,” he recounts. 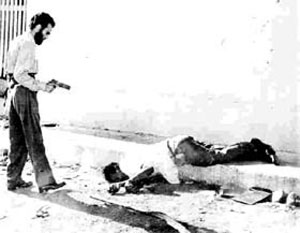 He says he is remorseful for having been at the point of killing a man named Jose Diaz when he arrested him in his home, where they took him with 14 AKs and several Makarov pistols.  “I put the pistol to his forehead and squeezed the trigger. If I did not kill him it was because the weapon jammed,” he said.

He served as investigator for the Ministry of the Interior (MININT) in the Guanabacoa police unit, dealing with cases of car theft and rape in the area of the beaches to the east of the capital.  He remembers that one time, when he was investigating a case of the rape of a young girl of 12 years of age, he was outraged and beat the arrestee he was interrogating with the butt of his pistol.

Avila also belonged to the Merchant Marine. He says he has transported weapons and sugar to several countries, among them Angola, Nicaragua and Honduras.  He says that in this latter country, 10 thousand tons of sugar were sent once, which were not for the Honduran people but were transported to a North American boat which was found lying alongside his boat.

“It was a mistake to have dedicated almost all my life to the Revolution. I ask myself all the time what did I fight for,” he told this reporter.

Avila Herrera retired with a pension of 279 Cuban pesos (slightly more than $10 US).  He lives in a dwelling that is a hallway with kitchen and bath. He decided to tell his story to the independent press because he is very disappointed in the government he served and for which he was willing die and kill.

HAVANA, Cuba, October 18, 2013, Michel Iroy Rodriguez / www.cubanet.org.- At the detention center known as “The Bivouac,” near Calabazar, on the border between the capital municipalities of Arroyo Naranjo and Boyeros, and Cattle Arroyo Naranjo, a repressive wave of arbitrary arrests launched by State Security between the 11th and 14th of this month, just before the second anniversary of the death of Laura Pollán Toledo on the 14th, resulted in the jailing of 46 opponents, in dubious circumstances.

From the early hours of Friday the 11th, until Sunday, State Security agents were arresting Ladies in White, regime opponents, human rights activists and independent journalists, so that they would not be able to attend the second anniversary mass for the death of Laura Pollán, nor participate in the usual Ladies in White Sunday March from Santa Rita Church in Miramar.

In protest against the arbitrary arrests, 23 detainees in “The Bivouac” went on hunger strike and all refused to be indicted on charges by the officers of Villa Marista (headquarters of the State Security). During the interrogations they were subjected to they received threats from officials from the political police.

David Aguila Montero, director of the Social Agency of Independent Journalists of Cuba (ASPI), who was detained from Friday the 11th and who was one of those who declared a hunger strike, said that the treatment of those arrested was deplorable. He spoke of activists with illnesses who were prevented from taking their medication or who were given it off schedule.

During the three days he was held, Aguila Montero claims to have seen 34 male regime opponents in “The Bivouac,”many of them from other provinces, and 9 Ladies in White, including Niurka Luque who, he said, had a wound on her face that looked like it was made with a knife when she was arrested .

After more than 92 hours, the detainees were released, but the whereabouts of 4 activists from the province of Pinar del Rio were unknown at the time of writing this information.

HAVANA, Cuba, August 28, 2013, Michel Iroy Rodriguez / www.cubanet.org.- The ballplayer Jonathan Machado Tarrago, nicknamed Suzuki, age 14, who was stolen base leader in games held in Taipei, China in July 2011, will not be allowed to participate in the 2015 Pan American Games in Toronto, Canada, as the son of a regime opponent. It is expected that he will also be suspended from the World Cup to be held in Mexico next year.

Yonatan Tarrago Machado was suspended from participating in games by State Security, because he is the son of Antonio Machado Ramirez, a political opponent of the regime.
His mother, Ana Maria Tarrago Ruiz, a resident of 80th Street between 49th and 51st, in the Havana municipality of Playa, says she feels hurt and that the measure is stupid. “They want to destroy the future of my son because of our political position,” she said.

Her son has played baseball since he was 5. When he was 8 he was eligible to play in the age 9-10 category, with a 300 batting average. He was batting above 300 in his first year in the age 11-12 category. The following year, when he joined the City of Havana team, he was already batting 489, but he was not allowed to be on the Cuba team. After several efforts by his coach, Jorge Mazorra, he joined the team to travel to Taipei, China, where he led with 13 stolen bases and a 615 average. Even then, his speed from home to first base of 7.7 seconds, and he had 22 hits and more than 24 stolen bases.

In 2012 he was again chosen by the Cuban baseball commissioner, who told his parents that due to his high performance in the leadoff spot he would be taken to the Pan American Games in 2015.

When Machado Tarrago was suspended from the Pan American Games, the teenager assigned to his place had much lower stats: 13 hits and 3 stolen bases.

“The Cuban government feels it has the power to destroy the future of any young person. It mistreats, humiliates and destroys whomever it pleases. It believes it is the owner of all Cubans, entitled to decide who will become something and who will not. And then they complain that young people want to leave Cuba. It’s not just because of economic problems that they go,” said Ana Maria Tarrago, the mother of this promising baseball player.