Cubanet, Manual Guerra Perez, Havana, 30 April 2015 — Laritza Diversent is a lawyer and director of the Cubalx Center of Legal Information, an independent office that has offered free legal advice since 2010. She graduated from the University of Havana in Law (2008), she is married and has a 16-year-old son.

What exactly is Cubalex and for what purpose did this project come about?

Cubalex is an office that specializes in human rights issues, focusing on national law and the conventions of international laws, which Cuba supposedly relies on. We try to document violations of Human Rights, but our core business is to provide free legal advice to citizens.

The legal advice is for citizens who are ignorant of the law with regards to disparate issues, topics as diverse as housing, criminal, immigration procedures, in short, the varied issues we face daily. Always in legal terms.

Do you collaborate with lawyers from the collective law firms to represent your clients? Who makes up Cubalex?

Our organization is composed of several lawyers, human rights activists, a medical assistant, paralegal and secretary, here in Havana. We also have offices in Camagüey, Granma and Las Tunas. We received requests from the Isle of Youth and to the East, from Baracoa for example. END_OF_DOCUMENT_TOKEN_TO_BE_REPLACED

The Cuban judicial system needs many reforms. Many articles of the Universal Declaration of Human Rights are not addressed in national legislation. There are no laws to exercise the right to complain, protest, freedom of speech, nor for the protection of women, or people with disabilities.

Cuba has signed many international treaties that have no direct application within the system. The National Assembly (Parliament) has had no interest in legislating on human rights issues. This is a very difficult issue for the government. To date it has not evidenced any intention to provide protection or guarantees for citizens’ rights.

There was a robbery in our office where they stole all the computers, all the mass storage media with all the information of years of work.

It was an intentional theft, with a specific order to take only what contained information. My husband and I were abroad and my son had gone to school.

At that time part of the team was undertaking a training abroad. Inside the house there was valuable equipment that wasn’t stolen. This incident resulted in our being unable to serve the public for a month.

Why are people flocking to Cubalex and not the collective law firms?

I think in collective law firms they don’t give the required attention to their clients. They do not provide the free legal advice they offer and we do.

The lawyers of the collective law firms have a conflict of interest because they act on behalf of an individual and the state at the same time.

The Ministry of Justice has established fees for legal service contract but the lawyers of the collective firms charge extra to try to complement the service they offer. The people who usually come to us are poor and are unable to pay those extra fees a lawyer asks. If a customer does not pay those fees, there is a complete lack of interest and motivation that results in little or no results.

In many cases, lawyers for law firms act more like judges and prosecutors than like defense lawyers. They are also ignorant with regard to Human Rights, which is where we specialize. ”

We collaborate on Human Rights, information and complaints to agencies of the United Nation. With the Office of the High Commissioner for Human Rights or the Inter-American Commission on Human Rights, through the provision of injunctions, presenting petitions, hearings. We also have contacts with other international organizations specializing in human rights and other related organizations.

We had to go to these institutions because we are not educated on Human Rights. Although we studied law we were not given adequate training on the subject and so we had to go to these organizations to give us tutorials, information to present strategic litigation at the international level on this issue, as we do the State. If this does not resolve it, then we present them to international organizations. This is the kind of relationship that we have these bodies.

Do you feel satisfied with the work done Cubalex?

We have grown from the legal, personal and cognitive point of view. We have been able to learn more about the concerns of the population, to know what are the main violations toward society. In 2013 we went to the United Nations and participated in report to the Cuban State on the convention on discrimination against women. We have presented reports on people with disabilities, the situation of human rights defenders such as the Ladies in White and independent journalists at hearings of the Inter-American Commission. We want to give a minimum of information to the majority who do not know that Human Rights are violated in Cuba. We live in a society almost closed in terms of information, with limited access to the Internet.

Have Cubalex members been assaulted or harassed by the authorities?

Assaulted, not directly, but they have been visited by the Department of State Security (DSE) members working here. Our lawyers in Eastern Cuba have received a lot of pressure because the authorities say they will not allow a site like we have here. Authorities also increased the smear campaigns in digital media.

We have requested an injunction from the Inter-American Commission on Human Rights that was given to us to protect our work team. The State must follow the recommendations of the Commission although we know that they do not do so but have responsibilities toward the commission. Therefore we ask for our lives and our personal integrity. Everyone knows that the Law 88 remains in force, it has not been commuted, or suspended, so we fear that they could take any legal action against us.

What are your thoughts on the resumption of relations between the governments of the United States and Cuba?

On a personal level I am in favor of this reset because I think it’s the first step to end the conflict. This is a conflict between governments and those who principally suffer are the Cuban people.

On the other hand, the new policy published by the White House on the issue of the private sector, human rights, support for civil society and communications, we still have reservations about, in the sense that there is a legal system of citizen control that prevents this development. Because I believe it is a necessary step does not mean I agree with everything or believe that it will be effective.

It is the responsibility of civil society to find information on these legal restrictions that exist and prevent the politics of goodwill of the United States toward the private sector (which I still insist this sector does not exist in Cuba), Human Rights and civil society, to warn about the dangers could represent, because here there is a blockade of the government against its citizens.

The contact between the two governments has awakened civil society, which sees that change in Cuba is not dependent on any foreign government but on Cubans themselves. We are preparing ourselves, therefore to seek ways to put pressure on the government, if they do not want to talk to us we have to out pressure on them to do so.

How would you describe VII Summit of the Americas in Panama, where you participated?

In general terms the summit was a positive balance for independent Cuban civil society, and I had the opportunity to participate on an equal footing with others in Latin America. This was very helpful to make it known that there are people in Cuba who think differently than the government, who want democracy and respect for human rights.

Moreover, the Cuban State showed its own nature, violent and intolerant.

Describe your meeting with US President Barack Obama, in the forum of civil society in Panama

“Firstly I should clarify that I didn’t participate in the forum of civil society, as I was not accepted by the Panama NGO that selected the participants.

I was in a private meeting by invitation, where the dissident Manuel Cuesta Morua and 13 other leaders of Latin American civil society were also present. There President Barack Obama expressed his support to foster the development of civil society in the region, and invited those present to say in which way they (also there were the the presidents of Uruguay and Costa Rica) could support us and encourage the Latin American civil society. Venezuela and Cuba were the ones who began to offer recommendations because both countries have the most repressive contexts in the entire region. Most agree that civil society must have sources of funding to develop and to carry out their projects.

In my particular case I called attention to the dangers that surround the Cuban legal system with regard to the policy that the US government intends to develop with Cuba on the issue of the private sector, communications and everything else. It is impossible to obtain any financial or material resources through donations or any other kind of help that can be given by current banking regulations within Cuba. 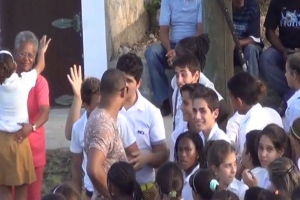