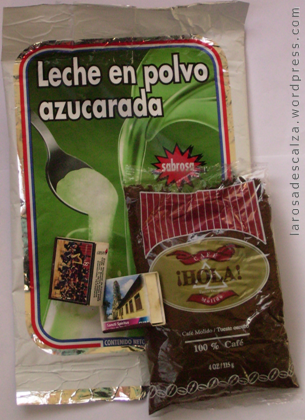 I was walking down the street early in the day when the whispers and voices of a group of people coming my way surprised me.  I discovered two police patrol cars in the next corner and I overheard the same group of people talking.  I asked them what going on and they said the owner of the corner convenience store had been arrested because someone had broken into his store!  The thieves had cut the vertical metal door into an oval shape, entered the store and walked out with the entire monthly quota of powdered milk, matches and coffee.  For all those who are unaware of our “magical unrealism”, I tell you that in the last five decades our government has subsidized a few basic nutritional staples lacking in variety and durability.

Powdered milk, for example, is only distributed in the exceptional cases as a medical diet for the sick, the elderly and children, and in every case they must have and present documentation showing they are allowed to buy a 2.2 pound packet a month. Usually it’s also on display in hard currency stores, but the prices are prohibitive for the majority of the population. The knife’s edge of scarcities we Cubans navigate cut our chances of improving our quality of life and threaten our freedom, as we survive on the shore of illegality.

It is the ironic option that imposes on us a rarefied business where everything belongs to the state, where unfortunately transgression has installed itself as the standard of conduct in our society–except in politics– and it’s easier to break the law than to drink coffee with milk.

For the Cuban citizen it’s an assumed fact that according to procedures, the authorities have, in these cases, arrested the person in charge of the establishment because they allege that on previous occasions it has been they themselves who have planned the misdeed (the “self-robbery”) in order to make some money or to justify a shortage in their stock. I imagine that foreigners who hear or read stories like this are completely shocked by the absurdity of these tales of “true amazement” where “everyone is guilty until proven otherwise.”

Years ago, in the bodegas, they would sell basic food products at higher prices under the counter, commodities such as powdered milk and coffee, as what is allocated for thirty days doesn’t even last fifteen. At times, ironically I think, they would habitually ration, or in order to establish “a culture of rationing” that cemented another “of saving,” more as a way for them to “unite wills” and influences.

It’s incredible, given that Cuba is an archipelago, that they even ration salt. Often the shopkeepers will add salt to the rice to make it weigh more, already to grain is moistened with the same end as it is sold by the pound. Also, farm products are sold with the dirt still on them for the same purpose. I wonder, indignantly, if someone will run such a scam on our individual, family and national wealth, but I’m sure that once more I’ll be left without an explanation, which in itself implies “the answer.”