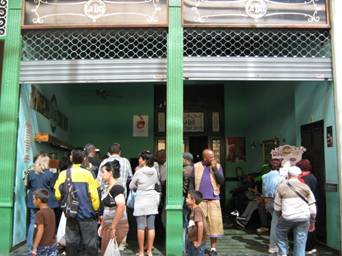 Government bureaucrats like to complicate things and, in turn, the lives of citizens. From their privileged positions of power, they do and undo at whim.

With the matter of cooperatives, the form of work preferred by the State for the self-employed, they have formed a terrible entanglement: they began with the so-called agricultural cooperatives of different types, and when they decided to leave the rural framework, they found no better name for the new ones than non-agricultural cooperatives.  They even now have their abbreviation: CNoA. Why not call them simply cooperatives?

Another spawn is the first denominated Wholesale Market of Agricultural Supply Products the Wheat Field, located somewhat distant from the center of the city, with the inconveniences that that entails. In reality it is no more than a simple Hub Market since its structure lacks the adequate spatial arrangement for buying and selling, besides which supply and demand do not work there: you pay the same per pound if you buy 20 or if you buy 200.

Before the Chinese merchants sold cheaper than the Spanish and Cuban grocers, because they formed a group and bought in bulk at lower prices, which permitted them to give discounts to their clients. The advantage of a wholesale market is precisely that of offering a variety of products at lower prices than in the retail market, depending on the volume of the purchase.

This is what permits the retail merchants, after deducting their expenses, from not having to raise their prices for the consumer in order to earn profits.  A question: Why not equip the old central Mercado Unico on Cristina Street, today in a state of abandon, as the Wholesale Market?

Another: Why in the state businesses, given beneficially to individuals, is all the attention of the supervisors from the Integral Management Oversight (DIS) centered in each territory? When they were state-run, in spite of their poor functionality, they were never controlled with regards to comfort, the presence of workers, hygiene, quality of services and their offers, as well as other aspects.

Now, like inquisitors, they fall on the individuals, handing out fines right and left, with fees of 1200, 700 and 200 pesos, and, if they think there is a recurrence, withdrawing the license. No one suggests that they not control and ensure compliance with established regulations, although these are exaggerated and sometimes even absurd, but it has to be the same for everyone, both individual as well as state businesses. Or is it that the state businesses enjoy carte blanche?

If you want the updating, although slow and limited, to introduce some small improvement in the difficult lives of the citizens, you have to, at least, eliminate the bureaucratic absurdities.