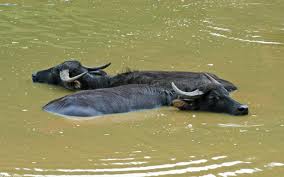 Cuban TV fed us some “red and juicy” information on the 8 pm news Wednesday, April 24. It was about some water buffaloes that “escaped” from a state farm and were grazing on the side of the road or wherever they liked, with the related danger that these animals posed for the vehicles on the road.

The author of the article interviewed the director of the site, who defended himself against the criticism he’d received earlier for the same situation, but claimed to have fixed the fence and that the cattle broke it again to escape.

My kids, who are 30 and 26 and only eat pork — beef is so expensive that generally is eaten by government elite and international tourists — laugh about it and I can only join in the amusement. Their mischievous looks leave the caustic question in the air: “How well was the fence fixed?”

In my house, as most likely as in many others, we thought that perhaps to expose a cattle trampling is the only way they can find some directors to eat the meat, and above all, so that they can take a piece to their family.

These water buffaloes were imported from Vietnam and have caused problems for the Cuban livestock industry being wild herds away from state control. In that country they live in swampy areas, and because of their ability to move through the water they use them to plow in pairs — like oxen in our fields — in the rice fields. Who would ever think bring them to Cuba and drop them into our  non-flooded lands to form a herd and run freely?

I imagine the joy of the rural collective when because of an accident they can taste the meat that is prohibited to them even at a party at the center, even more so when they know that some higher up sends the meat to privileged elite events. As an old friend of mine used to joke, “the wind of the Special Period” used to satirize that “the wind of the special period” took Cuba: some are ’more equal than others.’ But equal to whom?