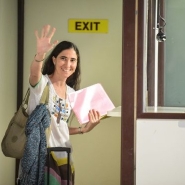 Brazil’s main opposition party denounced a campaign against the Cuban blogger Yoani Sanchez, who on Monday began a visit to Brazil; the campaign involved an official of the government of President Dilma Rousseff and the embassy in Havana, according to the ANSA news agency.

Alvaro Dias, head of the bloc of senators from the Brazilian Social Democratic Party (PSDB), called for an investigation of Ricardo Poppi Martins, member of the Secretariat General of the Presidency, whom he accused of having participated in a meeting at the Cuban Embassy, where, he said, a campaign was orchestrated to sabotage Sanchez’s visit.

At that meeting, which according to Veja magazine was held on February 6, organized by the Cuban Ambassador Carlos Zamora Rodriguez, activists from the left also attended.

The publication noted that at that meeting the ambassador distributed a dossier against the blogger to be disseminated through social networks and said that Sanchez’s steps would be monitored when she arrived in Brazil.

The General Secretariat of the Brazilian Presidency said on Saturday that Poppi Martins was at the Cuban Embassy on February 6 to obtain a visa.

The functionary was invited to participate in an international workshop on social and alternative media, held in Havana from 11 to 13 February. He still has not returned to Brazil.

The Secretariat said that it did not authorize any official to deal with Yoani Sánchez’s trip and that it was not informed of the meeting at the embassy. It added that the alleged involvement of Poppi Martins will be “duly proven” on his return.

There is an ongoing “criminal association with the Embassy of Cuba with segments of Brazilian politics, which affront our sovereignty and freedom in our country, it is something we can not ignore and we must act,” said Congressman Dias.

Sanchez arrived in the early hours of Monday in the city of Recife and was greeted at the airport by several friends, including filmmaker Dado Galvao, her host in Brazil.

The blogger will attend the screening of the documentary “Connection Cuba-Honduras,” by Galvao, and participate in discussions. Then she will travel to Sao Paulo.

Social Democrat Senator Dias anticipated that he would present to Senate the Committee on Foreign Affairs a request to investigate the alleged conspiracy against Sanchez.

He said the Cuban ambassador’s conduct violates the Vienna Convention.

“The Vienna Convention requires that diplomats can not interfere in the internal politics of another country. Despite being Cuban, she (Yoani) will be in Brazil and here there is total freedom. Unlike what happens in Cuba, here there is freedom of speech, of the press and we not support this kind of embarrassment, especially driven from the outside,” said Dias, according to O Globo.