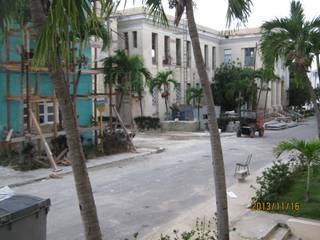 A few weeks ago I was “driven” to Calixto García General Hospital by a doctor friend who, like the Orisha deity Elegguá, opened doors for me. The purpose of my visit was to receive medical attention. I have no complaints about the professionalism of the medical staff who, in spite of the difficulties and shortages with which they must deal, work hard to provide a good service to their patients, whom they treat with kindness and concern. This experience allowed me to see first-hand the current state of the above-mentioned hospital, which for some years now has been subjected to a prolonged series of unending repairs after decades of neglect.

Construction activity is evident everywhere: dilapidated medical wings, demolitions in-progress, building materials stored outdoors and inside the hospital, mechanical equipment being moved, construction workers going back and forth without doing anything, people shouting and other signs of activity. In the few areas that have been completed, one can see details such as sloppy plaster work on the walls and crooked tiles on the floors, signs that the repairs will not last long.

I do not know who came up with the brilliant idea of putting the various medical departments’ outpatient clinics in the basements of their respective wards, both the ruined and the repaired. Access to these clinics is either along broken sidewalks and pathways, or through steep, narrow exterior stairs. There are no ramps provided for the physically handicapped so wheelchairs cannot be used, forcing families of the patients to cart them up and down in a dangerous and embarrassing display.

The clinics’ waiting rooms, which are without air-conditioning or good ventilation, are veritable saunas, making them unbearable for the patients seeking treatment.  It would be better to not even mention the older buildings, which suffer from roof leaks, flooded floors, peeling walls and broken doors. Dirt and decay abound and seem be be everywhere in the health service’s facilities. It is hard to imagine how services can continue to be offered in such wretched and unsanitary conditions.

Physicians lack even the most basic clinical tools such as light panels to view X-rays and computers to read test results. They often have no more than a table, two chairs and, at best, a stretcher, all in a state of deterioration.

One can observe a shortage of specialists to treat patients, which causes significant backlogs and wasted time for the clinics’ medical and nursing staffs, who carry on long conversations about problems in their personal lives, often using inappropriate language, while patients wait to be treated.

Those who manage to get into the waiting rooms quickly become bored reading the extensive propaganda slogans lining the walls, which remind them of the fallacy that “medical care is provided free at the expense of the State.” (In reality it is provided at the expense of its citizens.) They seem like commands, ordering everyone to accept it all with resignation. Meanwhile, others mill around outside, sitting on the sidewalks, fences and even the grass while awaiting their turns.

If there is an operation planned, then the process stretches out interminably. First there are various tests and analyses to be performed. Waiting for test results drags it out further. Then there is the wait to be admitted to the hospital, which can take months and often ends in bitter disappointment if tests have to be repeated because they are out of date.

Operating rooms show signs of an advanced state of decay. In recently renovated wings where post-operative patients are held, there is an obvious absence of a responsible administration as evidenced by a shortage of sanitary fixtures. Only one out three sinks is operable and showers lack their necessary hardware.

The situation is no better when it comes to janitorial services, which are performed by unqualified staff, who simply spread the dirt around by trying to clean an entire wing with one bucket of water. Even then, everything is done reluctantly, accompanied by constant complaining.

It should also be noted that those working in food service, which in general is badly prepared, do so in their street clothes, without using gowns, masks, hair coverings or gloves. During the day food vendors proliferate throughout the hallways, selling sandwiches, peanuts, coffee, chocolates, cookies and other items in clear violation of the regulations that should govern a health facility.

It seems that, in spite of all the construction activity and resources invested, there are still some blemishes in Calixto. Despite good medical care, in the end its hospital services leave that patients with bad memories. They are forced to put up with them because, unlike foreigners and VIP patients, they do not to have access to the specialized centers which are featured in news reports and shown to visitors who still believe in the myth of “Cuban medical prowess.”