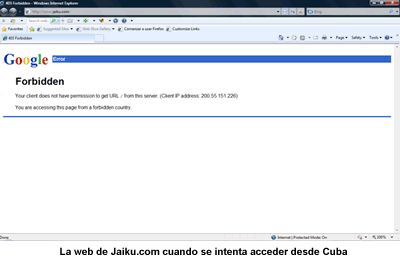 Finally, I sit down in the chair of a hotel, open my laptop, and look from side to side. Seeing me, the security guard mutters a brief “she came” into the microphone pinned to his lapel. Afterwards some tourists appear, while my index finger works the mouse as fast as it can to optimize the few minutes of Internet access. It’s the first time in ten days that I’ve managed to submerge myself into the great world wide web. A list of proxies helps me with the censured pages and I will see the Generation Y portal from an anonymous server, the bridge to banned sites. In three years I’ve become a specialist in slow connections and badly performing public cybercafés under surveillance. Feeling my way, I administer a blog, send tweets that I can’t read the responses to, and manage a nearly collapsed email account.

After bypassing the limitations to reach cyberspace, we Cubans see the censorship that grips us from two different sides. One comes from the lack of political will on the part of our government to allow this Island mass access to the web of networks. It shows itself in blogs and filtered portals and in the prohibitive prices for an hour of surfing the WWW. The other – also painful – is that of services that exclude residents in our country under the justification of the anachronistic blockade/embargo. Those who think limiting the functionality of sites like Jaiku, Google Gears, and Appstore for my compatriots will have any effect on the authorities of my country are naïve. They know that those who govern us have satellite antennas in their homes, broadband, open Internet, iPhones full of applications, while we – the citizens – trip over screens that say “this service is not available in your country.”

Just as we get around the internal restrictions here, we also sneak through the closed gates of those who exclude us from abroad. For every lock they put on us there is a trick to picking it open. But it still frustrates me that after avoiding the State Security agents below my apartment, paying a third of a monthly salary for an hour of internet time, seeing the animosity in the faces of the guards at the hotels, seeing that Revolico, Cubaencuentro, Cubanet and DesdeCuba continue in the long night of the censored sites, I go and type – like a conjurer of relief – a URL and instead of opening it seems to me that a wall has been raised on the other side.