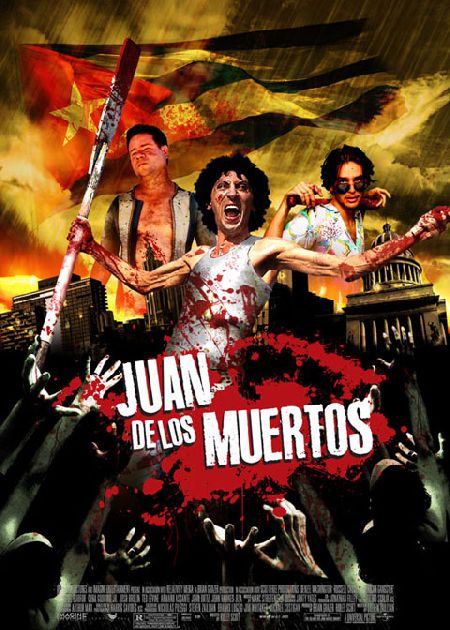 The nothingness, the apathy, the wall at the corner to sit on, forever wasting time. The hero of the film “Juan of the Dead” was already acting like a corpse before the zombies invaded Havana, a city in fact shrouded and dead. This fictional antihero calls on his creativity and ingenuity – in the midst of chaos – to establish a blood-chilling business. “We kill your loved ones,” reads the slogan of the company he creates with other pals as dysfunctional as he is; its market niche is to hunt the living dead. An enjoyable script mixes humor and fantasy, special effects and unretouched reality. On this side of the screen viewers are caught between terror and snickers, watching the image of the Capitol destroyed by a helicopter and the emblematic Fosca building reduced to rubble. They laugh and cringe at the same time.
Directed by Alejandro Brugués, “Juan of the Dead” is causing a furor in the Cuban capital. It has provoked extremely long lines outside the movie theaters, some of which end up with police beatings and pepper spray falling on dozen of eyes. But the curiosity in this case has been greater than the caution. More than gazing on a story of beings taken from our worst nightmares, the public wants to decipher the second reading contained in the film. Especially in the scenes where hundreds of desperate people leap over the wall of the Malecon — into the sea — to escape a county where putrefaction is gaining ground.

Something of the automatism of the shock troops and of the mob prepared to attack those who are different, is also exhibited by these frightful creatures that the hero confronts and whom he can only overcome by “destroying their brains.” And Juan is a character of great irreverence, someone who, according to his own words, has survived “Mariel, the war in Angola, the Special Period and what came later.” Such that, between laughter and shrieks, the metaphor crumbles, it is more direct. And it ends up tossing into the laps of the audience, perched on their seats, the cynical but clear question: Won’t you also be like corpses, a faraway look in your restless eyes, like zombies with no future plans, walking along La Rampa*.

*Translator’s note: La Rampa is a long street running down to the Malecon, and the sea, the location of much of what passes for what is left of Havana’s night life.