Luis Felipe Rojas, 30 July 2016 — This weekend — the end of July 2016 — Armando de Armas will open the Festival Vista in Miami. In the middle of the diatribes coming out of the U.S. elections, the Cuban novelist and essayist has given another twist to the torture with his gift of this corrected and expanded edition of Los naipes en el espejo [The Cards in the Mirror], Neo Club Ediciones 2016).

You don’t write books to get applause. De Armas knows this, so he came with the rigor that accompanies him in speaking of “an epochal change.” In this handful of essays, De Armas takes a brief run through the U.S. political swamps, from Andrew Jackson to Obama. De Armas sharpens his stylus to take us into a game of cards: the myths that surround a “progressive” and generous Democratic Party, and the poisonous venom that the Republican Party spouts on the public plaza. But he also skirts the imaginary public that remains undecided or doesn’t want to call a spade a spade, in a fight where they’re going to lose their dreams of a lifetime.

The part about 2016 holds the political cards that are close to Obama and those following in the slippery footsteps of Hillary Clinton, and it ends with the ace unveiled on the U.S. political table: Donald Trump, a surprise for some, “a process that could be seen coming” for others, as Armando explained to me recently on the program Contacto Cuba, where I interviewed him.

“It’s possible that the world, facing fragmentation, returns to empires. Let’s not forget that in the past, empires came to impose peace, order, prosperity and freedom on vast regions of the planet dominated by chaos, desolation, poverty and death (a consequence above all of the coninuous wars and riots among the multiple tribes), and that, at the point of a sword, they were a decisive civilizing factor,” writes the Cuban essayist. 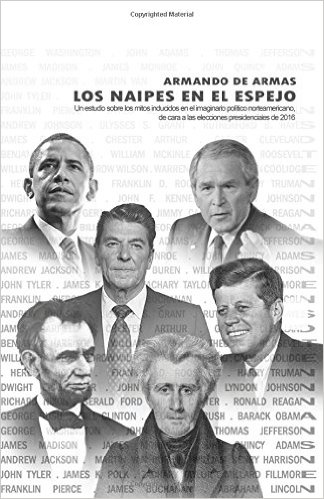 Perhaps this book won’t be one that draws applause. There are people who become serious when talking about politics…or when truths like these are thrown in their faces.

Armando de Armas will present Los Naipes en el Espejo [The Cards in the Mirror] on Saturday, July 30, at 4:00 p.m. on the panel, “United States: The Big Parties in the Election Season,” and will be accompanied by the journalist, Juan Mauel Cao, and the political strategist, Ana Carbonell. The location is the Miami Hispanic Arts Center, at 111 SW 5th Ave, Miami. 33130.