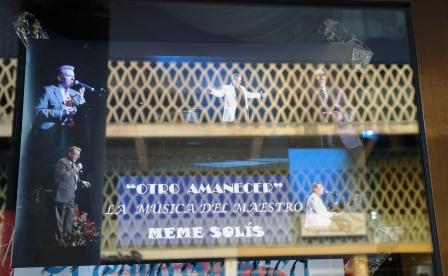 Havana, Cuba. Last weekend the America Theatre presented the show “Another Dawn”. The staging brought the Havana audience musical themes composed by Meme Solis one of Cuba’s most famous musicians. After his departure into exile his compositions were banned on Cuban stages, until this, the first tribute.

On each occasion the America Ballet surprised with its choreography, this time by Amaury Mina and Juan Carlos Castano in which they were directed by Yamira Suarez and Gray Zayas.

The show was directed by Yanelys Tuya, scenery was by Maykel Sanchez, orchestration recorded by Osvaldo Rodriguez and Tomas Rivero, the original idea and staging was by Raul de la Rosa.

Havana showed its appreciation with its applause in packed houses, not only recognizing Meme’s work, but the value of those who, after his departure, continued performing his musical numbers in Cuba.

Meme Solís did not travel to Havana for this tribute but, surely must be feeling the fraternal warmth that greeted his music in Havana. Converting this musical set into one of the key pieces for “Another Dawn.”