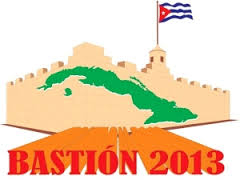 For speaking so much about peace, being at an economic crossroads, and having announced moderation in the use of resources, the government spared nothing on its Bastion 2013 strategic exercise, and the entire country came out to prepare against an illusionary enemy. That is, if we believe what we read in the media; my son experienced it a different way.

A call was made by the University during the normal class schedule, and attendance was guaranteed since not attending amounted to an unexcused absence. Male students in Economy, Finance, Cybernetics, Tourism, and Geography were gathered in the university stadium. Noisy and disorganized, the students gathered in the center of the field into something vaguely resembling formation. In front, a stranger in civilian clothes, tried to bring them to order; for their part, the professors spread among the students tried to do the same.

Before the general disorder with microphone in hand, the stranger in front shouted in a booming voice “Attention!” Failure. Mockery broke out among the students and the man with the microphone had to resort to conciliatory patriotism without much success. However, he did manage a general laugh after haranguing them with his diatribe when he put “At ease!” students who had never been in any other position. Troublemakers in the group yelled at him to shut up and there was spontaneous applause for problems with the sound.

The only moment of silence came during the hymn; an even bigger silence if you keep in mind that the students weren’t singing; a silence broken only by a cell phone that rang twice. Later, a girl read the requisite communication from a Lieutenant Colonel who spoke of compromise, country, the enemy, and such things. The activity ended with the students moving to the theatre of the School of Psychology to see the movie Caravana, Kangamba, or some other bellicose audiovisual presentation. Failure. With attendance now taken, most students found better things to do.

A television camera witnessed what happened at the University stadium: perhaps with good editing of the material, something has come out of these days of victorious exercise to guarantee “our military invulnerability”.