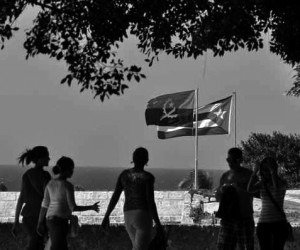 HAVANA, Cuba, October, www.cubanet.org – Recently returned from the Republic of Angola where she served as a volunteer, an official still can’t hide her astonishment while telling her story. I’ll call her Mireya because she asked me not to reveal her real name.

She is fifty years old. Thirty-two years ago she gave herself to the Socialist Revolution. She really internalized the “New Man” advocated by Che; at twenty-three she held dual membership in the Communist Youth and the Party. She was serious, deep, devoted to her work and above all to the Party.

She transferred from a job as a quality inspector at the municipal flour company in Guantanamo, to the National Bread Administration in Havana. During the inspections, the administrators and inspectors feared her. Over the years she had learned how to find when a problem was being hidden and always uncovered violations and crimes in fulfilling the technology directives.

The drivers also feared her, they said she “looked like a general.” And even the Board of Directors respected her. Besides being an excellent professional, she was the secretary of her Party cell.

She was selected to advise the Angolan Food Ministry with regards to bread, as reflected in an agreement signed by both countries in 2002. Mireya was tasked with implementing Cuban technology directives in the far off African country. For three years, she organized the work of seven Angolan provinces and the capital, Luanda.

She was under a contract with the Cuban firm ANTEX, SA, with an employer who was paid six thousand a month for her work, but she was entitled to only six hundred, of which she never got more than one-hundred-sixty. And at the bottom of the contract it said the other part was for “Cuba sí” (for the victims of hurricane Sandy), and forty for food. During her mission her two granddaughters were born and she was crazy to see them, and in order to save money and be able to take it to Cuba, she skipped the evening meal.

But when Mireya arrived at José Marti airport, she says she met with a capitalism worse than Angola’s. The Customs officials demanded that if she wanted to bring in her household goods she had to pay as if she’d bought them there, a huge amount of money they left her stunned. She argued that she’d already paid for them to ANTEX, but the Customs officials responded that this was another payment, a different one. And Mireya, crazy to get home and meet her granddaughters, paid very grumpily.

And at home, with her granddaughters in her arms, she said the shock didn’t end. She learned she had lost her job, the law stipulated she could only be gone two years and a day and she had to start from scratch.

And when she went with the letter to buy the car, they told her there was a delay with the older volunteers, of two years. And she had to deposit the money in the bank and wait her turn. And she couldn’t touch it because she would lose the “right to a car.”

Now Mireya, with no job, no money and no car, authorized me to write her story. Everyone knows that three years in Angola isn’t easy.