Angel Santiesteban’s struggle is not in vain.

The more the dictatorship tried to silence him by shutting him away in its miserable concentration camps, his strengths only continued to grow, so that now he is not alone in being recognized for his excellent literary work. The dictatorship established him in world history as one of the umpteen heroes who, like he, set themselves as a model, each minute, each second, in order to fulfill their sacred duty to defend liberty and the rights of all. 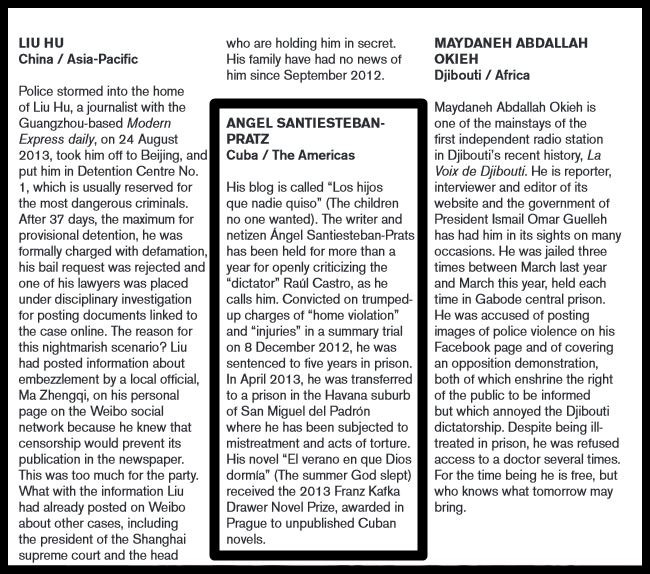 When an organization of the caliber of Reporters Without Borders, which doesn’t back down one second in its work of protecting those people–famous or unknown, be they journalists by profession or not–who day by day contribute to illuminating the world and giving an account of reality in all its forms, includes Angel on the list of the “100 Heroes” who put their ideals “at the service of the common good” and set the example of courage, then the ruinous intents of all those who tried to convert him into a delinquent “home invader and woman beater” dissolve into nothing, from the dictator Raul Castro through his political police and his “justice,” up to those tiresome colleagues and former “friends,” members of UNEAC (Cuban Writers and Artists Union), and the rest of the fauna out there who swarm to put Angel’s reputation on trial.

What an immense honor to be part of that list of “100 Information Heroes”! How different it is from that list of “the five assassins“!

The writer already had reached international dimension with his award-winning work; now, thanks to the dictatorship, he has attained also the status of defender of liberty, democracy and human rights.

From my humble place as the editor of the blog, happy to return to Angel the voice that they try to stop by imprisoning him, enabling all his posts and denunciations to be published and spread around the entire world, I can do no less than thank immensely Reporters Without Borders for their invaluable support and solidarity that shows every day they support Angel; and Dictator Raul Castro, since without his intervention, none of this would have been possible.

Reporters without Borders publishes the list of the “100 Information Heroes.”

On the occasion of the World Day of Freedom of the Press 2014, Reporters Without Borders publishes for the first time a list of “100 information heroes.”

Gifted with exemplary courage, these “100 heroes” contribute by their struggle or their work to promoting the freedom, as stated in Article 19 of the Universal Declaration of Human Rights, of “investigating and receiving information and opinions, and disseminating them without limitation of borders, by any medium of expression.” The “100 heroes” put their ideal “at the service of the common good,” and thereby have set an example of courage.

“World Press Freedom Day–whose creation was promoted by Reporters Without Borders–should be the occasion to recognize the courage of these journalists and bloggers who, by their vocation, every day risk their security and on occasion their lives,” said Christophe Deloire, Secretary General of Reporters without Borders. “The ’Heroes of Information’ are a source of inspiration for all the women and men who aspire to freedom. Without their determination and that of all similar people, it simply would not be possible to expand the area of freedom,” he added.

The list of Reporters Without Borders–which naturally is not exhaustive–is a recognition and homage not only to the 100 persons cited, famous or unknown, but also to all the journalists–be they journalists by profession or not–who day by day contribute to illuminating the world and giving an account of reality in all its forms. This initiative has the object of demonstrating that the struggle to defend and promote freedom of information gives intense support to the victims of aggression, but also serves to erect figures who can serve as models.

The list of the “100 Information Heroes” includes women and men of all ages (from 25 to 75 years old) and all nationalities (65 countries). The youngest, Oudom Tat, is Cambodian; the oldest, Muhammed Ziauddin, Pakistani. Iran, Russia, China, Eritrea, Azerbaijan, Mexico and Vietnam are represented by at least three heroes for each one. On the list of the 100 appear such different personalities as Anabel Hernandez, author of a best-seller about the collusion of Mexican politicians with organized crime; Ismail Saymaz, a Turkish journalist who has faced some 20 lawsuits for his reporting; Hassan Ruvakuki, imprisoned for 15 months in Burundi for having reported on rebel movements, and Gerard Ryle, director of the International Consortium of Investigative Journalists, who contributed to the development of global journalistic investigations.

Some journalists perform their work in democratic countries. This is the case with Glenn Greenwald and Laura Poitras, Americans who reveal the massive surveillance of the American and British intelligence services. Others exercise their profession in more authoritarian regimes, like the Iranian journalist Jila Bani Yaghoob. Not all are journalists by profession. The Vietnamese citizen journalist Le Ngoc Thanh also is a Catholic priest. Many of them, like the Italian journalist who specializes in organized crime, Lirio Abbate, has made corruption and criminality in his country his battle horse. That’s the case of Peter John Jaban, a radio operator in Malaysia, who during a long period lived exiled in London; of Serhiy Lechtchenko, a Ukranian investigative journalist, and of the Bulgarian, Assen Yordanov, who often receive death threats. Among those portraits, Reporters without Borders also included activists like Maria Pia Matta, who from the World Association of Community Radio defended for close to ten years the freedom of expression for community radio in Latin America and the Caribbean.

Courage is the common denominator of all these personalities. In Uzbekistan, the authorities didn’t have any doubts about torturing Muhammad Bekjanov to obtain his confessions; the journalist is detained for 15 years. He isn’t receiving medical attention despite suffering from tuberculosis. Eritrea found itself in last place on the World Classification of Press Freedom 2014 of Reporters without Borders; it’s the seventh time it occupies this position. In this country, Dawit Isaac has been in the dungeons of the dictator Isaias Afeworki for 13 years. Mazen Darwish, founder of the Syrian Centre for Media and Freedom of Expression, who received the Prize for Press Freedom 2012 (“Journalist of the Year”) from Reporters without Borders, finds himself imprisoned for more than two years by the regime of Bachar el-Assad.