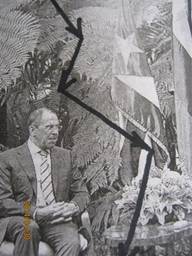 An untimely and hasty journey by the Russian Foreign Minister through several Latin American countries last week was surprising. Rather than a normal official trip to cement relations overseas, it seemed like a bunt play in search of allies. After its expansionist actions in Ukrainian territory, with the annexation of Crimea and the intention to appropriate Russian-speaking territories using the violent actions of their followers in the regions close to their own borders, Russia needs political support at any cost, both from its former partners as well as its friends.

With the tense situation created in Europe, where the Foreign Minister had been the principal spokesperson for his president, and a key figure in defense of his nationalistic and nostalgic-imperialist desires, the timing chosen to review economic and commercial accords in effect until 2020 is disingenuous; and equally so to talk about the state of bilateral relations which, according to his own statement, are not strategic associations, but ones of brotherhood and solidarity.

In addition, he appears now with a repetitive criticism of the American blockade, an offer to invest in the Mariel Special Economic Zone, and a conversion of a tenth of Cuba’s debt to Russia into an economic investment on the Island, an unlikely carrot, more akin to an operation to buy political support.

Missing, before and during the conversations, were the now classic: laying a wreath at the José Martí statue in the Plaza of the Revolution, visiting the Mariel Special Economic Zone, attending an event at La Colmenita, and meeting with the families of the spies. Nor was he interested in enjoying the “largest workers’ march in the world.” He had other priorities.

The reality is most countries act in a similar way, when they need others to endorse certain political acts, but at least they do it with diplomacy and not in such a crude and clumsy way.

The right thing to do would be to resolve the Ukraine crisis peacefully, through mutual respect and serious dialog between the parties, but for him it’s not permissible to try to break up the country, supporting its Balkanization, with the supposedly “noble objective” of protecting the Russian-speaking population or any other nationality.

Before, according to the official propaganda, Ukraine was a sister to Russia and also to Cuba. Now it’s been converted into an enemy of both. How is this possible? It seems that this sisterhood has always been a simple fraud, like the many we’ve had but no longer do: it responded only to short-term political interests, without any other real sentiment.

We hope that this rushed visit of the Foreign Minister doesn’t presage a new Sovietization of our country, now updated as Russification, because having Russian speakers in a country seems to present the danger of a territorial appropriation.