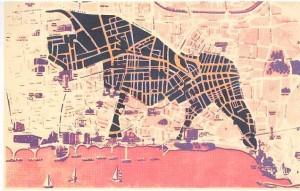 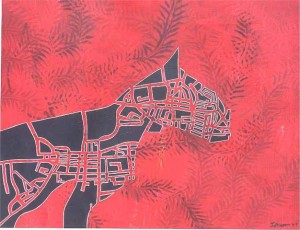 For a decade critics have been talking about the poetic, Baroque, telluric and zoomorphic painter Ibrahim Miranda Ramos (Pinar del Rio, 1969), who presents his swarm of metaphors in UNEAC’s Manuela Villa gallery, where he invites us to unravel his allegories on Cuba and the world through the prints of his series Punishment, Bondage and Maps, woven together under the Carpentier title, The Lost Steps, which is presented  through a woodcut on paper, offering a face tattooed with rivers flanked by carts with goods on a red background.

In one of Villa Manuela’s rooms, Miranda surprises the visitor with an installation of multicolored fabrics of varying dimensions titled Without Destiny. The fabrics seem like a pretext to return to the rivers and infer the limits and the crossroads that interweave the searches of the man. The tendentious nearness of the Nile, the Tigris, and the Danube, with the Hudson, the Yangtze, Ganges and Mekong, exemplify the comprehensive geographical point of view of the creator.

Ibrahim Miranda’s search for paths and his philosophical concerns are reflected in the suggestive figures recreated in maps. The originality of his pictorial cartography gallops on the prints, A Pig in Sao Paulo, A Bull in Tel Aviv, Horse in Madrid, Elephant in Berlin, The Beast of Sanlucar, and Horse in London, the first four from 2007, the others acrylic on cloth from 2010.

While this surreal map room is a part of a hermeneutics that challenges our codes and puzzles, it will lead to a conceptualization that goes from history to the perception of the creator and his technical instruments, although initially Ibrahim was inspired by the poem by Jose Lezama Lima, Island Night: Invisible Gardens, and subsequently by the novel by Alejo Carpentier The Lost Steps.

But the authenticity of the maps and their philosophical narrative sense, connect the artist with the route closest to him, the cartography of Cuba, given in two series: Punishment and Bondage, both in collage on paper from 2006.

In the series Punishment, the photographic montage of a nude woman who hits a child, becomes a metaphor to suggest the pain of Cuba, interlaced by overlapping maps that externalize the notion of inside and outside: the island hits its children who, according to the exterior images, ceased to feel but put up with it.

In the series Bondage, less intensely colored, the limits intuited are more external and with a social connotation: discrimination generates emigration. Faces, maps and birds induce spaces and searches.

Other spatial codes animate the poetic and the philosophic uneasiness of the painter. Ibrahim Miranda Ramos, has exhibited in other galleries in Havana, Switzerland, Spain, the United States, Brazil, Austria and Canada, and lectured on his work in museums and universities in Europe and America.

Until mid-July Miranda’s screen prints await us on the walls of Villa Manuela, where his rivers flow and from his maps jump birds and animals who arouse reflection, illuminate memory and enrich our imagination.