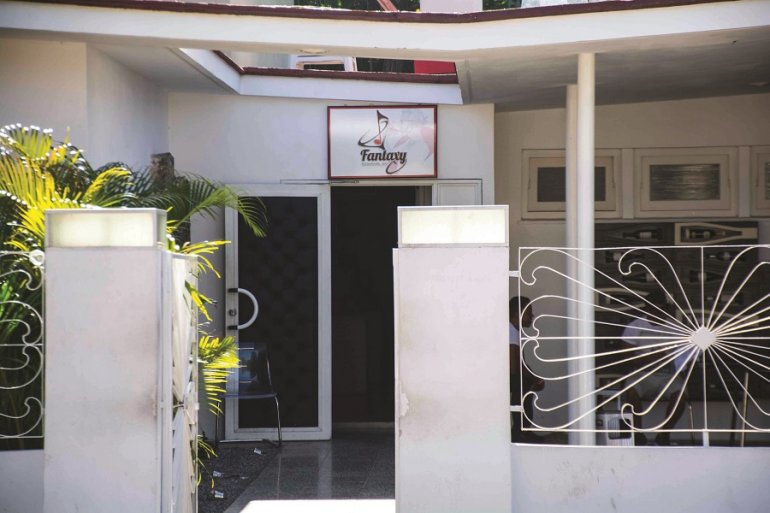 Juan Juan Almeida, 9 February 2017  — In Cuba being a member of the Castro family is like having a modern-day license to commit  piracy. This inalienable right comes in handy for the dynasty’s descendants, especially those born with the compound surnames Castro Soto del Valle and Castro Espín.* The most recent example of the prerogatives that come from sharing a pedigree with the royal family of Cuba is a private business in Havana’s exclusive Miramar district run by Sandro Castro Arteaga.

In addition to being a well-known DJ, the young man is the son of Alexis Castro Soto del Valle and grandson of the late Cuban leader Fidel Castro. In the midst of a campaign against drugs, prostitution and fraud, the capital’s municipal government “temporarily” suspended the issuance of licenses for new privately owned restaurants on September 16, 2016. Yet in that same month it ignored directives from Isabel Hamze, acting vice-president of the Provincial Administrative Council, and issued a permit for a new bar and restaurant to be operated by Sandro.

Located at the intersection of 7th Avenue and 70th Street in Miramar, the former Italian restaurant is now a fashionable discotheque, a place where an elite young crowd enjoys Havana’s nightlife with no concern for the hour of day, the day of the month, or how much alcohol or other substances are consumed. The establishment, which reserves the right to admit whomever it chooses, has a maximum legal occupancy of ninety people, far beyond the limit set by law for seats in private restaurants.

The restaurant sector grew out of a governmental self-employment initiative known as cuentapropismo, which was an intended as a palliative solution to families’ economic problems. As a result, there are now more than 1,700 private restaurants throughout the island. These small businesses have benefitted from Raul Castro’s modest reforms, the noticeable boom in tourism and the rapprochement with the United States.

“If you like what’s cool, what’s exclusive, and you like rubbing elbows with celebrities, Fantasy has what you’re looking for. It offers different environments, good music and a demanding clientele. The interiors aren’t anything great but it’s the perfect place to organize an event. Once inside, you are protected while at the same time you are beyond the law. It’s heaven for party-goers,” says a young regular. “In a country where everything is controlled, it’s uncontrolled,” he adds.

Another Cuban youth, who lives in Miami but was recently visiting the island, says he has been to the discotheque a couple of times and claims that the requirement for getting in is “looking like you have enough dollars to pay. If not, you are not well received.”

“You have to make a reservation beforehand but, if someone gets there and offers them more money, you run the risk of losing your table. Individual drinks cost an average three or four dollars and a bottle can go for as much as eighty-five dollars,” adds the young visitor from Miami.

Faced with such blatant chicanery, Havana started reissuing licenses for new private restaurants on October 24, although it continues to warn owners that they must comply with regulations on noise and closing times (3:00 AM) as well as prohibitions against hiring artists, on the consumption and sale of drugs, and on prostitution and pimping.

It also announced that there would be routine quarterly inspections of new and established businesses in which “different factors” — a euphemism for the regime’s various agencies of repression — would oversee compliance with regulations. It also set up groups in every region to monitor this new form on non-governmental management.

But Fantasy manages to evade any oversight. It defies easy categorization. By day it is a pizzeria and by night a nightclub. This combination leads to a certain “ambiguity” in terms of its actual use and purpose.

“Where the captain rules, the soldiers have no say. No one can go against the son of Alexis Castro Soto del Valle. It’s a scandal; it’s unbearable. They play music at full volume. Boys come and get into fist fights. Trucks make deliveries at all hours of the day and night. The police are here but they don’t do anything. Miramar is a residential area. We have sent a ton of letters complaining to authorities but they  don’t dare take any action. Sandro is one of Fidel’s grandsons and that’s all that matters,” says a neighbor who, like others, prefers to remain anonymous.

*Translator’s note: A reference to the children of Fidel and Raul Castro respectively.