Michael Novas, a resident of El Cotorro, in Havana, was surprised by the text message his wife sent on Saturday April 16 from Valencia, Spain, where she saw television images of the “amazing parade” held at the Plaza of the Revolution to celebrate the 50th anniversary of the socialist nature of the Castro government.

Noting that his cell phone beeped, he was enjoying the third part of the American film Pirates of the Caribbean American, “more fascinating than the political shows mounted from time to time by the gang of senile night owls who misgovern Cuba.”

He declined, however, to contaminate the euphoria of the lady with his critiques against such events. “She called me half an hour later for catharsis on the spot. She knows that our dictatorship revives the ghosts of the past and seeks legitimacy with populist acts, but she doesn’t not lose the sense of wonder. What worried me most was the teenagers shouting slogans and the old hierarchy who presided over the ceremony.”

Like Michael, other neighbors beyond the rhetorical contortions of supposed battles and victories, speak with disgust about the parade on April 16 and the forms of coercion to secure the assistance of thousands of children and adults.

“They refused to pay me the hard currency for the month for refusing to go to the Plaza to represent the workplace,” says Miguel, a sports trainer of 42 who returned months ago from Venezuela. He adds that “both the administration and the union responded to the Party for the mobilization of the assigned quota of workers.”

Jorge Hernandez, 59, an unemployed taxi driver, said, “This isn’t change, it’s the same political song as in the sixties; my oldest daughter went to keep her job in the Habaguanex store where she works; the younger one got out of it with a medical certificate.” 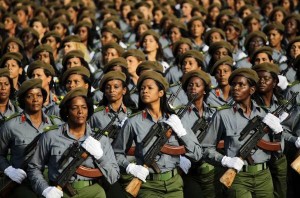 The artisan Orestes C. A. thinks that “most of those attending the parades don’t do so on their own initiative, nearly all are called to go by their school or workplace. Even the officials go because they have to. The case of the military and the “militia” is different; the officials govern and organize as if they owned the country; the military are like zombie guerrillas trained months in advance in exchange for promises and perks for their loyalty.”

I ask a colleagues from the independent press about the “amazing parade”; he makes a face of disgust and says, “It’s a matter of image, the Castro propaganda apparatus needs to display the supposed support of the people. Our army does not serve to confront any external enemy, but to intimidate Cubans. The act shows it is anchored in the past and in the manipulation of the masses.”