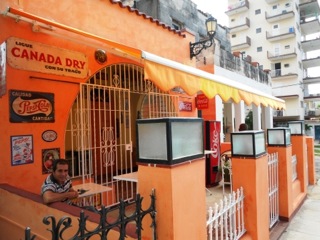 Havana – In recent days I posted a piece entitled “Today as Yesterday” in which I made mention of one of those start-up businesses emerging thanks to Cuban creativity, which are taking advantage of the Castro reforms.

It was supposed to be called the Today as Yesterday Cafe but now goes by the name Come On In, which the owners had to settle on at the last minute due to government censure. The government reprimand involved not only changing the name of the business but also removing all advertising that showed a period full of history and prosperity for the Cuban nation.

Anyone who sees the place today would not believe it if they had seen this family business when it was decorated with museum-quality placards. Now they would find only a few old items and two Cuban flags, hung after the removal of what illustrated, for new generations, the period which many of our grandparents briefly thought would be a recreation of a place to have a steaming cup of Cuban coffee, one hundred percent free of fillers

Now I say goodbye to what my camera lens captured a few days before the inauguration of what I thought would be Today as Yesterday, now converted into the Come on In Cafe.