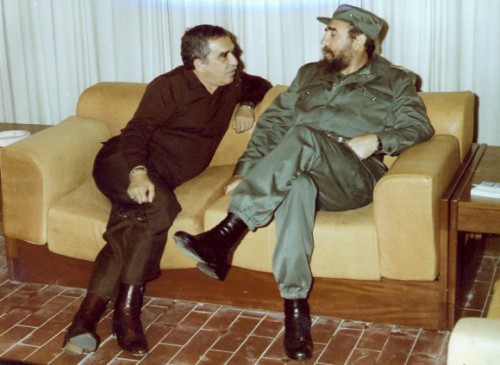 With the passing of Gabriel García Márquez (1927-2014), another death was also announced to the world, the death of a friend whose biography García Márquez had always wanted to write: Fidel Castro, the man who needs no introduction, the man who attempted the record of one hundred years of socialism in Cuba but fell short, barely managing to get past the halfway point.

Dear Mercedes,
The world, and especially the peoples of our continent, Latin America, have felt the physical loss of a distinguished thinker and writer. Cubans have lost a great, beloved friend who showed us solidarity. The work of men like him is immortal. We send to you and your family our heartfelt condolences and a sincere expression of our affection.
With love, Raúl Castro Ruz

Look! Not a single mention of Fidel—his brother and Cuba’s Maximum Leader for decades. President Raúl Castro Ruz talks about his own family and affords himself the luxury (or the nerve) of leaving out Fidel! He talks as though Fidel were but a distant relative, or as though Fidel had played a very minor part in Cuba’s storyline, just like that member of the Buendía family in One Hundred Years of Solitude that nobody remembers or that everybody gets confused with another Buendía as soon as they put the book down.

If that weren’t enough, up until now there hasn’t been a single comment (not even a fake one) from Fidel in the Cuban press.

Dear Mercedes, dear world: The message is clear. Alongside the loss of the great Colombian novelist, we also have to start getting used to the silent absence of Fidel, who never even got the biography that would have transformed him into an immortal character.

Raúl Castro’s “with love” is by no means really intended for García Márquez’s widow, in whom Cuba never really placed too much confidence. Raúl’s “with love” is, in fact, for Fidel’s soon-to-be widow.

P.S. A few days later, following an outbreak of rumors on social networks about Fidel Castro having died for the nth time, a wreath of white and yellow roses was sent on behalf of the former Commander to García Márquez’s funeral in Mexico, according to Cuba’s state press agency, Prensa Latina. On the silk ribbon was written: “For a beloved friend.”