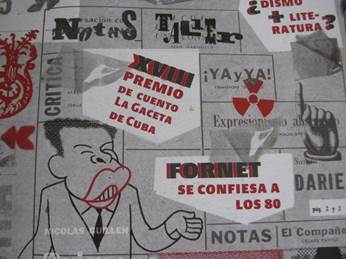 Fernando Damaso, 17 June 2016 — It is completely ridiculous that the Cuban Writers and Artists Union (UNEAC), a totally government organization that tries to present itself as “non-governmental,” issues a statement about the desecration of the bust of a popular Venezuelan singer, Ali Primera, that occurred in that country, when they’ve never been concerned to protest against similar events that happen in Cuba.

Here, in the face of the complicit silence of UNEAC, statues and monuments of colonial and Republican eras have been systematically destroyed, ones that although they have not been welcomed by the current authorities, form a part of the history and identity of the nation, independent of their political ideologies. The busts of many important figures in cities and towns have disappeared, opening spaces, for example, to convert the Avenue of the Presidents in Vedado — once dedicated to remembering the country’s presidents — to place foreign figures which should have been placed in Fraternity Park, which was constructed with this objective. Also accepted has been the changing of the names of public buildings, streets and avenues, as an act of political opportunism, along with the implementation of many other outrages.

All this has been a negation of the supposed national identity that they say they defend “with the sword and shield.”

If UNEAC, as a governmental organization, had to issue a statement in support of the discredited Venezuelan government, and its even more discredited president, it should not hide between this reprehensible act: it should do it openly.