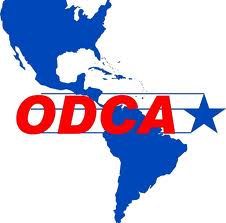 My husband Rafael León Rodríguez, who is the Coordinator of the Cuban Democratic Project (Prodecu), was invited months in advance to participate in the 20th Congress of the Christian Democrat Organization of America (ODCA) held in Mexico August 23-24. It was the first time that there was a real chance to attend an event of the institution we have belonged to for more than fifteen years along with three others — two in the diaspora and one, like us, in Cuba — in which we have always been represented by good friends who live in Miami and who have attended regularly and with solidarity on our behalf.

On July 22 we initiated the process at the Mexican embassy and for this left the formal invitation sent by Senator Jorge Ocejo, president of this hemispheric organization and his personal data. From that point we started the anxious rush-rush with a great number of comings and going to the embassy with growing concern that the Cuban authorities would “pass the buck” to the obstacles in the Aztec consulate to block the trip out of exhaustion or helplessness, and they themselves would remain blameless.

From there, there were lost papers and even disparate conditions for the awarding of permission, but finally they granted it a month later, thanks the tenacity of the ODCA board and our representatives in Miami, which managed to overcome the different and several obstacles that arose. On 22 August in the morning, after great uncertainty and agitation, they put the visa in the passport and at night, almost with our “tongues hanging out” we left for Mexico.

It was just four days — two of the Congress — that let us escape a cold discourse on paper with a signature, to present ourselves there and interact with the delegations of other parties, NGOS and institutions of our American Social Christian family. Respectful and effusive handshakes, expressions of solidarity and big hugs were eloquent recognition for the work of 17 years within Prodecu Cuba, despite the political cannibalism sustained by the dictatorial Cuban government for more than fifty years.

The board of the ODCA was reelected for another term, including its executive secretary, Mr. Francisco Javier Jara — and the most notorious jump for the two Democratic Christian organizations located in Cuba that belong to this regional organization, was that as of this year we are honorary vice-presidents in this prestigious continental organization.

Now what is left to us is the journey consistent to honoring this continued recognition with a sustained and viable work in support of achieving the two dearest longings urgent for Cuba: the completion of our nation and the final democratization of our country.