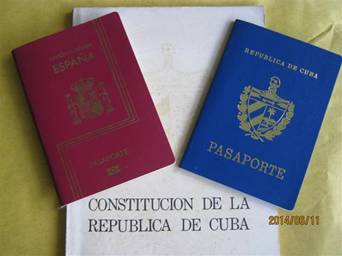 Chapter II, Article 32 of the Constitution of the Republic of Cuba stipulates the following: “Cuban citizenship shall be lost: a) by those who acquire foreign citizenship.”

However, for the hundreds of thousands of Cubans who have emigrated and obtained foreign nationality, and for the thousands who have attained residency in Cuba — mainly Spanish nationals — this clause does not apply.

One might think this constitutes a humanitarian, though unconstitutional, action by authorities to benefit those born on the island. The reality, unfortunately, is quite the opposite. By requiring one and all to have a Cuban passport — even if they hold another one — in order to enter or leave the country, the Cuban government brings in a respectable amount of money, especially since a passport is only valid for six years and must be renewed every two, with the resulting monetary expenditure.

In Cuba a passport costs 100 CUC and each renewal costs twenty. Overseas, however, Cuban consulates charge significantly higher fees. This is the economic impact but there is also a legal issue. Upon entering the country, an emigré is completely subject to Cuban law and the government of the country of which he is also a citizen can do nothing to protect him because, as far as Cuba is concerned, he did not enter the country with the other country’s passport but rather with a Cuban one. As is quite clear, the Cuban state commits this constitutional violation purely out of economic interests in order to obtain hard currency. Secondly, the same perverse motivation allows it to maintain complete control.

In today’s globalized world, where geographical borders become less important with every passing day, people have dual and even multiple nationalities. For Cuban authorities updating this legal statute presents no great difficulty. The flattering reference to the Soviet Union was dropped from the constitution once this state ceased to exist while the ridiculous term “irrevocable socialism” was later added.

Cuba, stuck as usual in the past, rejects renewal and refuses to join the present by continuing to promote its outdated image as a “besieged island,” which for over 56 years has generated substantial political dividends. What it does not realize is that the buyers are becoming increasingly scarce.