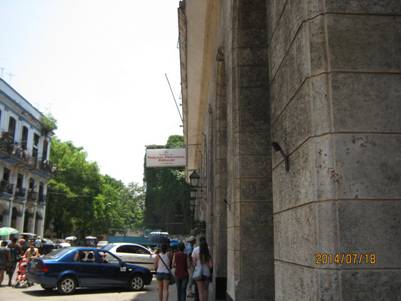 After having had to find out on my own — and wearing out the soles of my shoes in the process — what and where the registrar’s office for my area was in order to request a certificate that, in addition to other documents, was required to have the deed to my house certified, I finally found it. The premises, located on one of the most intricate and disrupted streets of Old Havana, were dark and unventilated. The very precarious furniture caught my eye. There was only one telephone, secured with a lock like those used on suitcases to prevent employees from making calls.

Luckily for me I had kept an old copy of the document in question. Otherwise, according to the employee — who treated me very politely, by the way — I would have had to look through those massive books, their bindings unglued and held together with string, under the same employee’s watchful eye, something which would have taken me all day. The books themselves were not particularly old but bore the hallmarks of long-term abuse.

Having completed the application, I then had to wait two weeks to pick up the document at the Courthouse. Imagine my surprise when on the appointed date I was allowed to go up to the office in question only after going through the annoyance of being forced to leave my purse and my belongings in a cubicle on the ground floor.

I did this under strong protest since I have never understood and still do not understand why one must leave one’s most personal articles in the hands of strangers. I let my displeasure be known, telling them that the same mistrust they displayed towards their customers — or users, as they like to call us — by making us turn over our purses, I felt towards them, adding that the only fair thing to do would be for them to provide a checklist of the belongings inside our bags so that we could confirm that nothing was missing when we later picked them up. Apparently, they did not like this idea.

I finally went up to the office where they had told me to go, but it turned out that the person who was supposed to give me the document had not yet arrived due to personal problems, so they suggested I take “a little stroll” and come back later. I spent the time taking photos of dilapidated buildings adjacent to the court.

By the time I returned, the employee in question had finally arrived, but the document that she was supposed to give me on the designated date was still not ready, so I had to wait in the office for almost two hours for her to prepare it.

During that time I witnessed situations that, as an outsider, should not have transpired in my presence. A pleasant one was when a worker from another department came to make an appointment to do some volunteer work the following day, but none of the five employees there took note of him.

Similarly, I witnessed the distasteful and loud protests of a woman claiming her son was still being held in detention in spite of her having paid his bail two days earlier. In a loud voice she threatened officials both present and absent and said that, if her problem was not resolved immediately, she would throw herself from the fifth floor window and those present would be responsible for her death.

Once they had handed me the document with its duly approved seals and relevant stamps, I headed downstairs as soon as I could and, in what was not a complete surprise, saw the woman who was having the problem with her son.

She was downstairs in the reception area, lying on the floor, very pale and barely breathing as the custodian and other employees were trying to revive her by providing first aid. Apparently, the pressure had been too much for her.