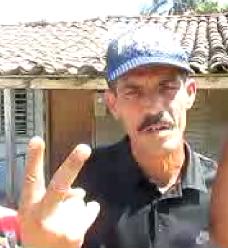 Julio Columbié Batista is a young peasant from Batey Grúa Nueva in the town of Violeta, Ciego de Avila. This co-chairman of the Central Opposition Coalition in that province, director and founder of the Orlando Zapata Tamayo National Civic Resistance and Civil Disobedience Front, is one of the brave opponents devoted to the cause of freedom in Cuba.

Without long academic instruction, nor a high cultural level he is an opposition leader in his community, beyond what has been developed in many in big cities. His sugar workers’ town has around a thousand houses and 3,000 persons engaged in agricultural activities mainly the sugar harvest.

There he has managed to win the well deserved respect and admiration of all his neighbors who recognize and like him. The political police, to get people to participate in their “acts of repudiation,” have had to resort to people from other places because his neighbors not only admire him but also are willing to stand behind him. It has been determined when the opposition protests there, they bring a number of members of the Special Branch and the Ministry of Interior to threaten and terrorize their neighbors if they join or support the protests.

His home is still thatched and rustic with a dirt floor and no shortage of large visible signs of non-cooperation campaign to draw attention.

One of the strongest pillars of the Front and the Cuban resistance is located in the Grúa Nueva village where discontent and the number of opponents are capitalized, and the opposition wins spaces.