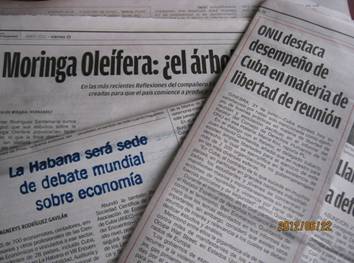 Cubans who did not have to rush off to a psychiatrist’s office in order to prevent a nervous breakdown after reading their nation’s newspapers this week should consider themselves lucky.

The front page began with an official announcement on the moringa plant—a type of American tree grown in the French tropics, with a white trunk and medicinal properties, and the source of an inexhaustible supply of meat, eggs and milk, suitable for consumption by animals as well as humans. The article stated that conditions have now been created to begin growing it in Cuba on a massive scale.

Another article asserted that the United Nations had commended Cuba for its exemplary record in the area of freedom of assembly and peaceful association. In thanking the Cuban delegate, it also noted the many opportunities Cubans have to exercise this right as exemplified by the existence of more than 2,200 non-governmental organizations (NGOs). The article went on to state that Havana would be the site of a world economic conference on June 2 to June 5.

Let’s break this down. First of all, after the disasters of the pangola grass, the zacharina, the pigeon pea, the micro jet banana, the noni, the eucalyptus and other miracle plants that were going to solve all our food problems, have we not learned, at this new stage in the implementation of the economic model, to avoid repeating mistakes? Are we going to do more of the same, yet again, with the blessed moringa? At what point will we stop looking to possible temporary miracles as solutions to our real problems?

Secondly, in regards to 2,200 non-governmental organizations (NGOs), is this a bad joke or an example of black humor? I do not know what sources the United Nations is using to come up with these figures, but it would be a good idea to revise them since they do not really seem verifiable. It they refer to freedom of assembly and association for members of governmental organizations, that is one thing. But it has to be made clear that this has nothing to do with those that are non-governmental, which are forbidden and suppressed. Are perhaps the dozens of organizations, federations, unions, etc. known by their various initials—CDR, FMC, UNEAC, UPEC, OPC, FEU, FEEM. ANAP—and others organized, funded and controlled by the government considered NGOs?

Thirdly, how can Havana be the site of a world conference on the economy when here it remains an unresolved issue that practically does not exist?

After reading these news articles,I imagine that others, like me, would see that the only option for maintaining one’s sanity would be to quickly find a good psychiatrist.