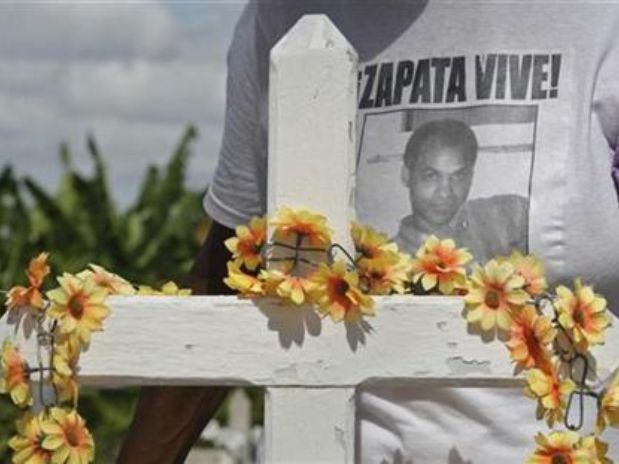 Every time I pass by the sports fan club in Parque Central, right in the heart of Havana, I think I hear Orlando Zapata Tamayo debating baseball matters.

Baseball was more than a passion for him. It was a style of life. The dissident — jailed for three years in 2003 for the crime of contempt, and then later the sentence was extended to 32 years for his rebellious attitude inside the prison — was a Cuban in its purest form.

I prefer the simple type of Banes, who like thousands of fellow countrymen born in the eastern regions of the island, flee from the ‘obstine‘ (frustration) and poverty in their villages and try to find better luck in the capital.

Zapata was one of those. In Havana he worked as an assistant bricklayer in the construction of Parque Central hotel, where at this very moment I’m composing this note. His political concerns were identical to those of the silent majority of Cubans, drivers with old cars for hire, fritura (fried food) vendors, or bicitaxistas who pedal twelve hours a day.

For several years Orlando was an anonymous dissident. It’s possible to investigate how his personal political transition started and when, openly and publicly, he began to desire a collection of freedoms for all citizens.

Zapata was similar to the front balcony neighbor that criticizes the state of affairs in the country. A desperate man of the street who doesn’t see a way, since constitutionally it doesn’t exist, to move Cuba on a democratic path.

There are many on the island like Zapata. Or in Cairo. Ideally this mulatto, who died at age 42, could be shouting slogans in Liberation Square. Or be Mohammed Bouazizi, the 26-year-old who set himself on fire in a Tunisian town far from the tourist brochures.

A memory comes to me of a chat I had on a cold night in February 2010 with one of his Republican Alternative Movement friends. He described to me those days, when unhappy with the arbitrary laws of the government that had imprisoned 75 dissidents in March of 2003, they left the Estadio Latinoamericano and, without a leader to exhort them, they marched from the baseball debating club in Parque Central along the streets, protesting the arrests.

And of course, I remember a short and sturdy opponent, who had suffered in prisons and hidden her emotions like everyone else, crying in silence in the living room of her house, remembering the young man, quiet, almost invisible, who was together with her on a fast, days before the raid of 2003.

I cannot forget the giant that is Reina Luisa Tamayo, his mother, who will not see Orlando, with his duffel bag in tow, coming down the alley of the poor neighborhood section of Banes where she lives.

A year after his death the message of Zapata Tamayo has force. It was precisely his death which led to a series of marches heard through the streets of Havana by the Ladies in White, shouting “Zapata lives.”

The repercussion and global condemnation over his death forced General Raul Castro’s government to negotiate a solution with the Catholic Church. If today a majority of the Black Spring dissidents can walk freely through the streets of Spain, Chile, the United States, or Cuba, it is thanks to this forceful weapon that was the death of Zapata.

A death that could have been prevented. Due to arrogance the regime did not stop it. They gained nothing. A maxim which every statesman must remember is that they should never use the relentless forces of power against an individual, healthy or dying.

It is not about ideology. It is a matter of humanity. The government of Cuba would gain credibility if, at one year after the death of Zapata, they would apologize publicly. Out of respect and decency they owe it to his mother, so shamefully harassed.

Reina Luisa will never recover her son. But it might be an initiation of the unavoidable dialogue that Cuba needs. The Castros should use leniency as a shield. It would be a way to atone for their faults. And believe me, they need it.