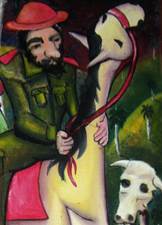 Fernando Damaso, 12 August 2016 — Despite some early warning signs, I never imagined that the cult of personality in Cuba would surpass that of Stalin, Mao Zedong and Kim Il Sung, to mention just three examples from the “socialist bullpen.” I forgot the wise words of the great Dominican-born Cuban general Maximo Gomez, when he observed that “Cubans either excel or fall short.” On the good things we usually fall short while on the bad ones we excel.

In 2016 “the elderly main character” has been called a great visionary, a political genius, the most steadfast disciple of José Martí, an invincible military strategist, a senior pioneer, an eternally young rebel, a daring fighter, the eternal guerrilla, a fiery prophet of the dawn, the reformer of Marxism-Leninism, a towering architect, a prominent educator, an unbeatable thinker, an original writer, a distinguished journalist, an innovative farmer, a senior public health professional, a solid economist, a major athlete, a stellar scientist and — to finally top it off — the creator of everything produced in the country (due to his “inexhaustible initiative”) for the last fifty years. It appears that “the Esteemed,” a term of praise reserved for the 20th century Cuban president Gerardo Machado, has conveniently been declared off limits lest it be applied to a certain absent-minded historical leader.

Every day mediocrities compete with each other to come up with new “qualities” in a attempt to outdo their predecessors from past eras in obsequiousness.

This year will go down in history as the year when many Cubans succumbed to opportunism, ethical shortcomings and cowardice, traits which will bring shame to their dependents.

This raises a simple question: How is it possible that someone with all these attributes has been such a disastrous ruler, leading the country into ruin and backwardness, and Cubans into poverty? Many, including myself, consider him to be the worst president in all of Cuban history.

It would have been much better for everyone if normal leaders — people with both virtues and flaws and without so many “qualities” — had been elected every four years. People without messianic beliefs or historicist pretensions. Rest assured we would not be in the predicament we are now, throwing stones into the socialist void. We would have preserved the accomplishments of previous generations and would be much more advanced.

In academic terms, this circus is referred to as a “cult of personality,” one taken to the extreme. In the Cuban vernacular it is known simply as guataquería* of the worst kind.

*Translator’s note: Systematic flattery or excessive adulation by praising or granting favors to someone in order to obtain personal benenfit or protection. (Source: es.wiktionary.org)