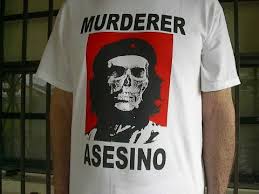 I now see how an asthmatic who was too sick to travel became someone who could kill and command his own army of troops. But twenty years would have to pass before I would be able to write such a simple statement. When you are six Februaries old and they force you to bring your hand up to your forehead in a salute and say that you want to be like the Argentinian Rambo… (the good guy), who killed Batista’s henchmen (the bad guys) and wanted all the countries of the third world (?????!!) to be free, then you think, he is not only Rambo, he is Elpidio Valdés.*

The Che I learned about in school made his way through the intricate byways of the Sierra Maestra, teaching his men how to read and use rifles while “slapping around” the knuckle-heads and brown-nosers among his troops. According to textbooks he was the one who captured Santa Clara and organized the army of bearded men who entered Havana in 1959. But then came the other Che, the one introduced to me through books wrapped in newspapers by dissidents in the 1990s. In pamphlets and newspaper articles the other Che (no longer a guerrilla hero) arranged executions at La Cabaña, screwed over Virgilio Piñera and called forth a river a blood in an attempt to overturn capitalism.

Five years ago I saw a photo of a bearded man dirtied from months spent in the jungle. I was with Javier Palacios, the Peruvian nephew of a former guerrilla army leader. The Peruvian man and his family want nothing to do with the icon immortalized by Alberto Korda and his camera. The stories they have heard about him are horrifying. They have buried once and for all the idyll of internationalism manufactured in the offices of the Central Committee of the Cuban Communist Party.

A guy who bullies, curses, walks around all day in a bad mood and years later seizes on several Cuban families (almost all of them peasants) with the story of doing away with imperialism…cannot be a nice guy. A guy who did not sing, did not laugh and did not play a musical instrument cannot be a nice guy. About five years ago a Spanish newspaper published a photo of his corpse lying in a laundry in La Higuera, Bolivia, all the veils fell away. The songs of adulation which had been sung for decades, the sea of ink and even the famous letter of farewell no longer mattered, even if you find out at the end of the story that it was read ahead of time as an order to kill. To Cuban ears it sounds like a settling of scores, like high-spirited taunting. Like saying, “You can go straight to hell.” As the saying goes, “He who lives by the sword…”

*Translator’s note: The hero of an animated television cartoon for children from the 1970s and 1980s who fights in Cuba’s 19th century armed struggles for liberation.