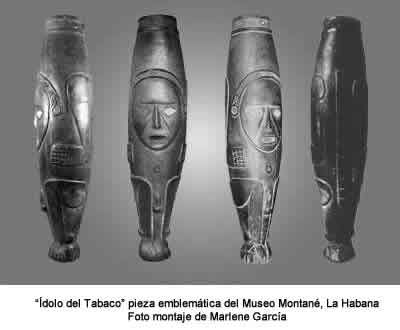 My grandfather chewed tobacco, biting down on it and moistening it with his saliva in an obsessive ritual that continued throughout the day. He also had a pipe, to which he added the coarse-cut tobacco he prepared himself, which he smoked only after meals. He belonged to the generation that grew up watching the most famous Hollywood stars smoking on the big screen and he imitated them from his seat in the movie theater. My grandfather didn’t look anything like a Humphrey Bogart with his irresistibly gallant cigarettes in Casablanca; nor a Marlon Brando enveloped in nicotine-filled smoke and sensuality. Because, unlike those glamorous men, Basilio Eliseo was a surly islander with calloused hands incapable of writing a full sentence. But he did share, with such famous characters, the enjoyment of a good cigar. The aroma that emanated — I can almost smell it now — was a mixture of sweat and nicotine, which hung in the air for hours after he’d left.

For Cubans, who still enjoy Havana cigars, it has become difficult to satisfy this preference. The market that operates in convertible pesos has absorbed most of a production that now trades at stratospheric prices in specialized luxury stores. Before the astonished eyes of passersby, whose monthly salaries barely exceed twenty-five dollars, the windows display boxes of the Romeo y Julieta brand for the a year’s salary, or a single Cohiba for a month’s wages. The offering of puros for sale in national money, at a price accessible to locals, is practically extinct. In part because the astute traders of the illegal market have captured the supply; they change the bands and sell them to the tourists as higher quality products. But also because the State has lost interest in selling to their own citizens a product they prefer to export, in order to earn juicier profits.

However, beyond commercial or even medical considerations, the truth is that the image of the old Cuban man with a puro between his lips is becoming a thing of promotional posters and commercial advertising. Neither a retiree nor an active professional — whatever their specialty — can afford to buy quality cigars at a price that bears some relation to their legal income. Thus, a national product has become an international one, a symbol of Cuban identity transformed into a trophy for visiting foreigners. Except for the growers who reserve some leaves for their and their family’s own consumption, ever fewer compatriots can choose this type of “smoke.” And it is not about defending, now, a habit harmful to the lungs and prejudicial to the pocketbook; but about recognizing that the so-called Havana cigar is no longer a product for those who live on the island, contrary to what many foreigners believe. The picture of my grandfather Elisha chewing the leaves or tamping the shredded tobacco into his pipe, is just that… an image full of anachronisms from those long ago days.