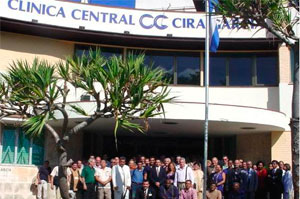 A few years ago, some friends encouraged me to taik about travel insurance for tourists coming to Cuba. What they cover, how the guarantee limits work, legal quality and certainty, which provisions are legally and objectively reclaimable.

This subject arose in relation to a retired gentleman, who was ill and as his family in New Jersey were unable to look after him properly for reasons of employment, they arranged things with family members in our country; retired people and student grand-daughter included, in order to make his treatment more effective and human, so that he could recover. They paid his very expensive insurance and additional costs for his stay in Cuba for a period of six months.

He began to run short of medicines, reagents, and vehicles to transport him about, etc. I don’t want to go into detail, to safeguard the family’s privacy. But the bottom line is: the sentimental grandfather left before three months was up.

After such a long time, I was asked to take on this work, because recently I went with a friend to the Cira García hospital for foreigners, whose services, drugs and other tests are paid for in Cuban Convertible Pesos (CUC). In the said location we inquired about the phantasmal travel insurance cover  in order to receive some service and, to our surprise, in spite of the fact that before coming to Cuba the insurance contracts between the overseas agency and Asistur Cubana were signed, it was not possible to look into anything here, not directly with the company, but you had to call the country of origin to deal with the inquiries. I was astonished, after querying with them about the cost and loss of time calling abroad when the Cuban company is in Cuba, and I received the reply which you can imagine.

With some experience in commercial contracts, I started to inquire if Asistur had in fact any agreement with the Cira García hospital to hande any medical insurance contract. You can again imagine the result.

Among the more significant factors in the poor legal security of contracts in Cuba is the monopolistic working of almost all the provisions which give rise to or trigger payments; contracts are generally unalterable and may not be queried, any ruling to do with valuation in provisions, which are slanted in favour of the party offering the contract, are dismissive and coercive; since there is no competition, you can take it or leave it. Moreover, although the parameters may appear fair in terms of guarantee, quality, processes to sort out problems reasonably and legally, they are never, in their absence in practice, inclined in favour of the client.

The backward and out-of-date character of the legal system in our country is much more serious than many people may think.