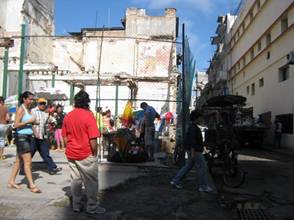 The slogan of the Cuban Workers Union (CTC) for their gathering to celebrate May 1 is “United for a Prosperous and Sustainable Socialism.” It seems there are different types of socialism, and the one with which we are familiar is that of the ration book, which is neither prosperous nor sustainable. Furthermore, I believe that all the former socialist countries — most notably the now defunct Soviet Union — have more or less had a similar experience with it too, and in general have rejected it. In spite of the difficulties and problems associated with the transition to capitalism, none of them want a return to the former system.

To call for this new type of socialism after more than fifty years of failed socialism is not only ridiculous, it is not even serious. Do the CTC and its political and ideological directors really believe that anyone will believe their new narrative? The unhappy experience of poverty, lack of productivity, squandering of resources, poor services, absence of freedom, impositions, restrictions and other tragedies that Cubans have endured have made us deeply incredulous about the prospect of a new luminous future within the next fifty years. The problem is that those who are proposing this are the same ones who proposed it more than fifty years ago, even though some of them have different faces. We are not about to trip over the same stone twice. Once is quite enough. And, besides, we have already paid and continue to pay a very high price for it.

At any rate, with or without the slogan, the parades through the different plazas will be massive, happy and colorful, as befits a well-organized society — one sealed with signed promises and checklists of accomplishments — in which civic inertia, fear, and concerns over employment and education are common. Turnout will be high, though privately most of the participants will care little about the celebration.

In short, the workers — ”with all their material and spiritual needs satisfied” — have only to applaud and give thanks to their government and its leaders “for the goods they have received.”