Raul Castro, are you satisfied now? 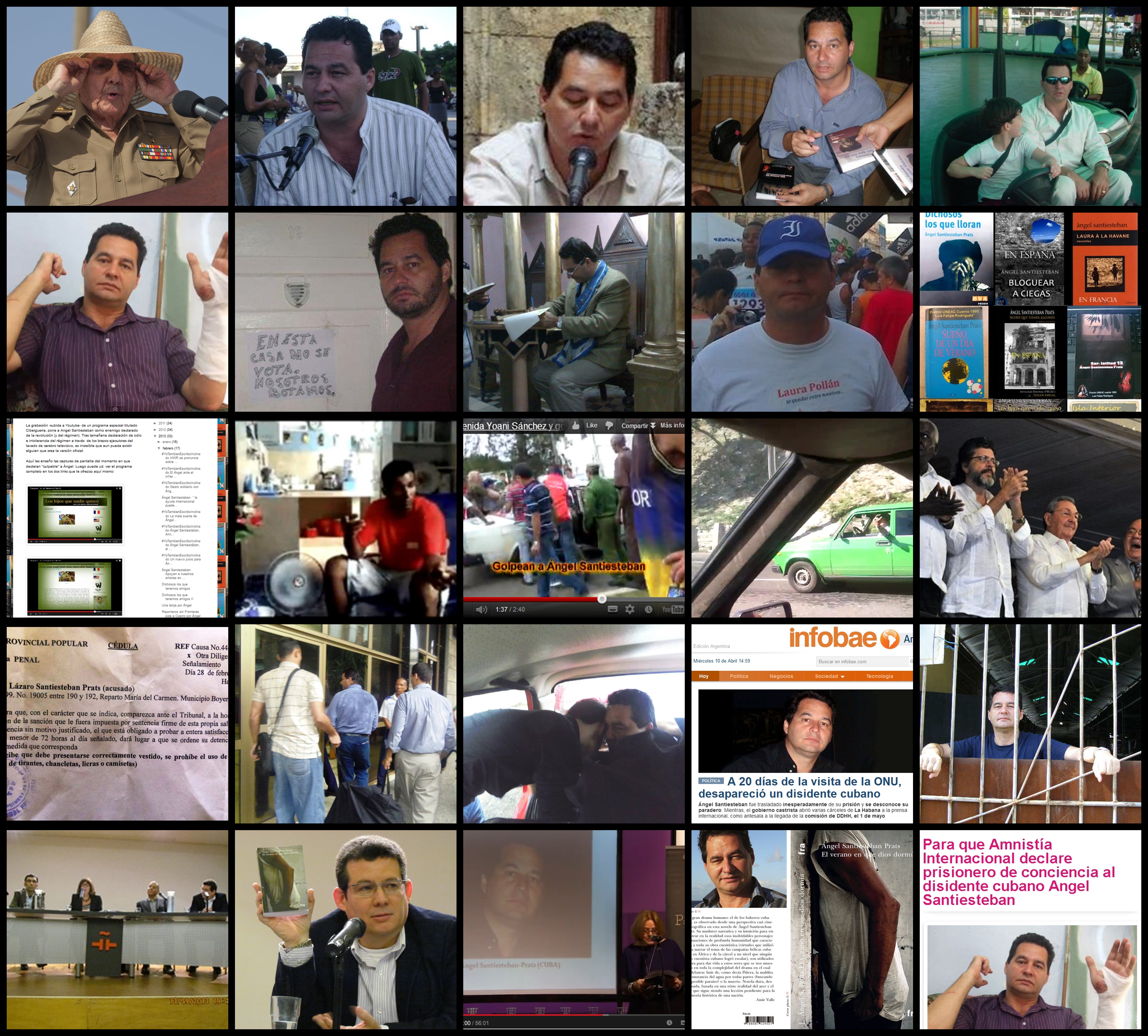 One year can be a sigh in time or an interminable nightmare; it depends on how you pass the year. To be deprived of freedom is always a bitter drink, but when in addition you’re innocent, when you’re condemned and incarcerated by a judicial system answering to the guidelines of political power of a dictatorship like that of the dynasty that you incarnate today, it’s much worse.

To this you have to add the characteristics of the prisons and concentration camps elaborated on by your Regime, which in no way resemble, neither in form nor in treatment, what you tried to make the national and international journalists who visited last year believe. They cowardly and immorally endorsed the farce to which they were subjected, ridiculing the tragic reality of the thousands of Cubans who, the length and width of the island, are brutally treated, tortured, humiliated and living in conditions that are absolutely inhumane.

As if the dirty complicity of the press wouldn’t have been enough the year before, this year, you, Castro II, tried – and with great success – to gain support for your dictatorship from the member presidents of CELAC, the secretary of the OAS, the director general of the United Nations and the European Union – which only a few days ago, announced that it would resume negotiations with your dictatorship, without caring in the slightest about the destiny of the 11 million inhabitants of the island. Economic interests are more powerful than the fundamentals at the dawn of the 21st century, but the OAS and the UN seem not to notice that they are consenting silently to letting other nations enrich themselves at the cost of Cuban blood and tears. Pathetic but true.

Meanwhile, in the concentration camps and penitentiaries of the Prison Island, more than a hundred political prisoners wait in vain for justice and freedom, and much of the opposition who are being besieged today will, before long, be political prisoners also.

The existence of the opposition in these circumstances should cause an international scandal, but on the contrary, it’s ignored obstreperously by those who can do something. Only the governments of Chile and Costa Rica showed interest and concern for the reality of the opposition in Cuba, and not for the Chinese story that they sold to all the rest of Havana in the context of the Second Summit of CELAC.

How far can the hypocrisy of the bigshots of the world and their selective blindness go? If the clamor for freedom, democracy and justice by the Cuban people isn’t enough for them, they should lend an ear to the people of Venezuela, whose country was colonized by its dictatorship in order to exploit the natural resources, to submit to its people and thereby perpetuate the badly-named “Revolution,” whose true name is “military dictatorship,” which attains power through a coup in order to subvert another military dictatorship.

Now we can’t understand the suffering of Cuba without understanding what’s happening in its sister country, Venezuela. There you have 30 million inhabitants who are submitted to the designs of Havana through its dauphin, Maduro, who came to power through electoral fraud, and since then has only intensified the task of “Castroization” of the country initiated by the deceased Chavez, another general who attempted a coup, and who governed as a dictator for 14 years in spite of having come to the presidency through the ballot box. The same as Adolf Hitler.

Venezuela also has an increasing number of political prisoners; the communications media are being accosted and gagged; and the students who go into the street demanding freedom are brutally massacred by the FANB and paramilitary groups. There are many denunciations with photographs of Cuban State Security agents who are infiltrated into these barbarous acts and who, only by seeing the images, are clearly recognized by their “style.”

In Cuba we can’t talk about electoral fraud because the whole communist system set up by the dictatorship is a fraud. For 55 years they call “elections” with a system of one party and candidates chosen by the elite of the Communist Party. Only they are chosen; only they can be voted for.

All this terrible situation that both countries live, twinned by the stomp of your boot, Castro II, unites the whopping number of 41 million people who cry out and need liberty and democracy NOW, and the full presence of their rights and guarantees.

Ángel Santiesteban-Prats is a talented Cuban writer, a national and international award-winner, who one day decided to take off the mask and – whatever it cost – denounce to the world the sufferings of his country through his blog, opened in 2008, The Children Nobody Wanted.

Once he opened the blog, the “good” and the “bad” started arriving: the messages and warnings that he abandon his path. The pressure didn’t matter to him, and he went forward with his moral duty as a citizen of denouncing the Regime and reclaiming the rights that all sovereign people should have.

He undertook a long and difficult path the day he took the side of liberty and democracy, from physical aggressions, all types of threats, even ostracism and marginalization, including from those who called themselves good friends; and of course, betrayals here and there. None of this stopped him.

Finally the biggest infamy happened: His ex-wife and mother of his son made a false accusation with the support and advice of her then-partner, an agent of the political police. It didn’t matter to her to lie shamelessly and buy a false witness to send her ex-mate to prison because she couldn’t handle – after having abandoned him and leaving him with a small child during two and a half years – coming back to him to try again, and at that point he was involved in a happy and stable relationship.

These Machiavellian false denunciations finished by sending Angel to five years in prison for crimes that he did not commit after a farce of a trial that should be the shame of the Cuban judicial system. But no, in place of that, they insist on multiplying the violations of Angel’s rights, now ignoring the request for review of his trial that was presented in July last year by his lawyer, Amelia Rodriguez Cala, (recently disqualified – in a surprise move – for six months from exercising her profession in the courts).

He has been assaulted, harassed and threatened by his jailers, and they invented disciplinary punishments for him, like taking away the 70-day pass required for his type of penalty. In seven months he has left prison only once, at the end of September. That’s to say, not only are they violating rights universally consecrated but also they’re violating their own law, because it’s a right in force in the Cuban constitution to repeat the trial if the condemned requests it.

Today, February 28, 2014, Angel completes one year of imprisonment, hoping for a justice that doesn’t come, nor can it come while a dictatorship continues to occupy power in Cuba illegally. International solidarity can pressure the Regime to demand not only justice for him but also that the United Nations pacts be ratified. But that solidarity must be huge in order to counteract the immense harm that the presidents of the region have caused to Cubans: Secretary Inzulsa, Mr. Ban Ki Moon and the European Union, which drools over the chance to profit by doing business on the island.

I am calling for international solidarity on the part of governments, organizations and well-meaning citizens, to mobilize for Cuba and for all its political prisoners.

And meanwhile, I remind you, Raul Castro, of your absolute responsibility for the life and integrity of Angel, and for all political prisoners and members of civil society who are punished every day for expressing themselves and demanding freedom.

And I ask – now that you’re trying to make the world believe that you’re a reformist president and that you’re bringing change to Cuba – at least hide it a bit and take democratic steps that show your “good will.” Free all the political prisoners, ratify the UN pacts and call for open and free elections. If you don’t take these three steps, it will only go to prove that you continue being a ruthless dictator as you have been up to now, the same as your older brother.

I know perfectly that the ambition for power blinded your brother the same as you, but at that height of life, you should ask yourself if you can feel satisfied and rectify the course, so that at least the few haggard people who still have confidence in you don’t feel so defrauded when freedom finally comes and they can recognize the difference. And by the way, may God forgive you.