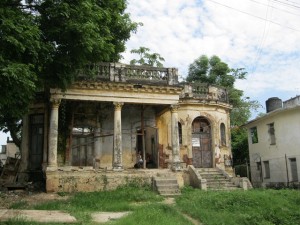 HAVANA, Cuba, October 2013, www.cubanet.org – Amid the ruins, the people living in No. 216 Tulipan, in El Cerro, are convinced they inhabit the same house where Manuel Sanguily lived.

“Sanguily lived here. On the terrace he had coffee with Maceo,” they’re heard to say, excited.

Beyond the myth or the truth, the house is falling to pieces with its inhabitants inside.

Leonila Mirtha Cruz is 61 and was three when she moved into the house. “My grandmother was the rent collector for the rooms.” Her eyes light up when she says, “Indeed, I know the history of this house.”

When it rains she leaves the one room to which her ownership has been reduce, and takes cover with a nylong bag under the eaves of the house across the street, until the rain passes. 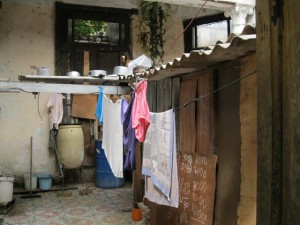 If there isn’t too much water, she puts the bed in the corner by the door into the room, where there is still a good piece of roof and falls asleep there listening to the sounds of the stones falling in the false ceiling. “The only place that doesn’t get wet is this little corner.”

Cruz explains the reason for the falling fragments of the roof:

“What I have up there is a grove of trees. A yagruma, a paradise tree, a capuli, and the roots grow at night.”

The roots hang down through the roof and the walls of the abode. Even more than its extravagance for the perception, the growing vegetation of the house, which retains the majesty of the ninetheenth century, contains the exact path to its end.

With the imminent danger of collapse, the house has a demolition order, but the authorities haven’t offered a way out other than eviction.

Cruz relates that, years ago, “they gave homes” to some families living in the rooms of the old mansion. But the bad luck of not having been on this list is to blame for her being alone. Her children left as rafters in 1994 and she hasn’t heard from them. “They left because they couldn’t take it any more,” she says. 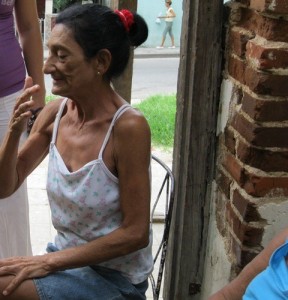 According to her account, the house was to be declared a heritage site in 1979. On that occasion, they were told the property couldn’t be touched.

“I’m content with a tiny little room like this,” she says, bringing together the tips of her index finger and thumb. And she adds, “Sometimes I tell myself it’s better to live in a cardboard box, because it’s less dangerous. Living here, a stone could fall on you and kill you. When the dead person has no one to mourn them, it’s worse.”

To shake off the sadness that has overcome her for a moment, Cruz says impishly, “Sanguily, get me out of here please. Find me a better room.”

“A coffin is cheaper”

In another room of the house a family of three gneerations lives together. The children, 10 and 11 years old, were bornthere. When the roof collapsed, they built a small house of roof panels and shingles inside the room.

The two children attend school. The clothesline with clean clothes and a few pots and pans, give a homey touch that speaks of humanity, which resists misery.

The children’s grandfather tries to fix a chair, straightening some nails with a table knife. He breaks the silence, “We have asked for help to fix the house, but it seems a coffin is cheaper.”

He points to the street, “The bosses come by here, the Housing boss, the Sector (police) boss. They say they’re going to tear it down, but without telling people where they’re going to take them.” He concludes, sadly, “This is abandonment, and they treat us as if we were animals.”

According to historic data, Manuel Sanguily received Maceo in the No. 14 Tulipan house on the latter’s visit to Havana. Both had fought in the Ten Years War.

In the pause before the War of ’95, specifically in 1889, they organized gatherings at this house, where the patriots discussed the future of Cuba. Sanguliy was considered by Maceo to be the exemplary figure of democracy.

With urban growth, the street numbering changed on Tulipan. What was once No. 14 Tulipan, now might be No. 216. But they no longer speak of democracy there. Its inhabitants are content to have survived the last downpour.

See related story of the “1889 Newspaper with a photo of the house” here.